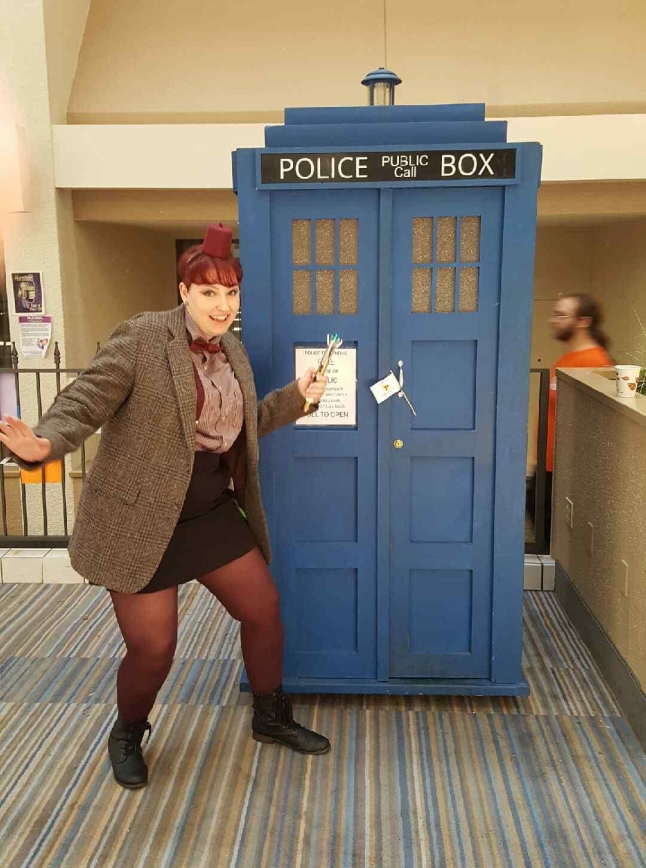 Many of the pieces of my costume are no longer available, or were purchased second-hand, so unfortunately I can’t link to where I bought them.

Blazer: The blazer is just a wool blazer I picked up at Goodwill. It had woven leather shank buttons, so I replaced those with some flat tortoiseshell buttons. There were no elbow patches on the blazer, so I bought some brown leather patches and sewed them on.

Shirt: The shirt is a men’s dress shirt that has tan and burgundy pinstripes, and from far away it looks pretty close to screen accurate.

Skirt: The skirt is a basic black dress skirt that I bought from Kohl’s.

Tights: The tights are burgundy tights that I bought from Target.

Boots: The boots are just a basic combat boot-style.

Suspenders, Bow Tie, and Sonic Screwdriver: The suspenders and bow tie were both purchased from Amazon, as well as the sonic screwdriver.

Fez: The trickiest part of the costume was the fez. I bought a regular size fez off of Amazon, and when I tried it on it was huge. I’ve mentioned in other posts that I have a smallish head, but this fez was gigantic. It practically slid down over my eyes. So, I decided to take a different approach – a tiny fez! I bought some burgundy felt and mocked up a pattern. I used poster board in the middle to give the fez some structure, and then hand-sewed the entire thing. I sewed it onto a headband, and the tiny fez was complete!

I’m really happy with how this cosplay turned out!