Did you know that General Hux has a blaster? He does, apparently, although we have yet to see him use it. The greatest mystery to me is where the heck he keeps it, since he doesn’t have a holster. It seems unsafe to keep it in a pocket, but…what do I know? The First Order has a problem with installing safety railings, too. My guess is that it’s all due to budget cuts because of Kylo Ren’s tantrums and having to replace everything he breaks. But, I digress…

I planned on having Hux’s blaster 3D printed, and I will probably do that in the future. But, I was made aware that Nerf released a First Order Stormtrooper blaster (their version of the SE-44C) for “The Force Awakens” and those blasters are very similar to the one Hux uses. I decided to buy one and try my hand at painting it.

That’s how it looked out-of-the-box. My first task was to sand off any logos and imprinted text. That took a while. I also sanded the majority of the blaster so that the paint had something to stick to. Then, my next problem was filling in the space where you could pull back the slide to get the blaster ready to fire a dart. I came up with probably the most ratchet-looking solution: I used a piece of foam to fill in the gap, and then sanded down a piece of a popsicle stick to fit across the gap, and then used Diamond Glaze to adhere it to the blaster and fill in any gaps. I normally use Diamond Glaze for jewelry-making, but it worked wonderfully for this! Once it dried, I sanded everything down smooth.

Then, I taped off the part that would eventually be painted silver with painter’s tape. 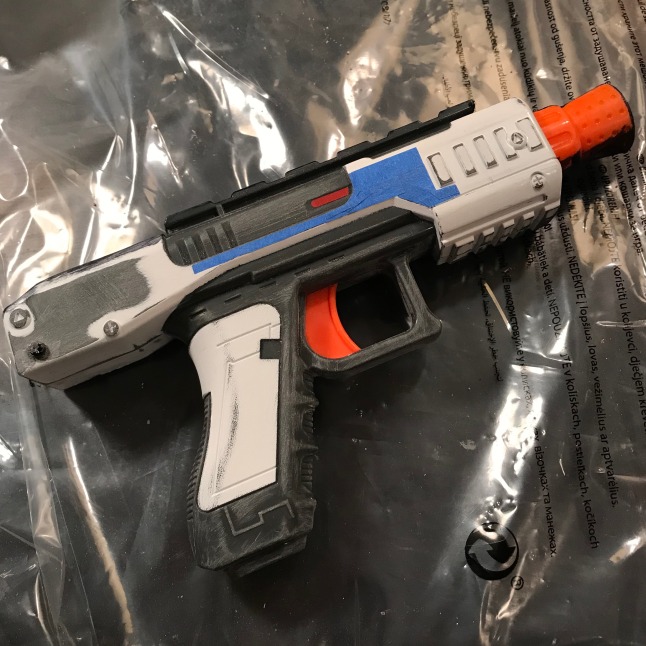 I started painting the blaster before I remembered to take a progress photo. Whoops! In any case, this is what it looked like after the sanding and prep work. 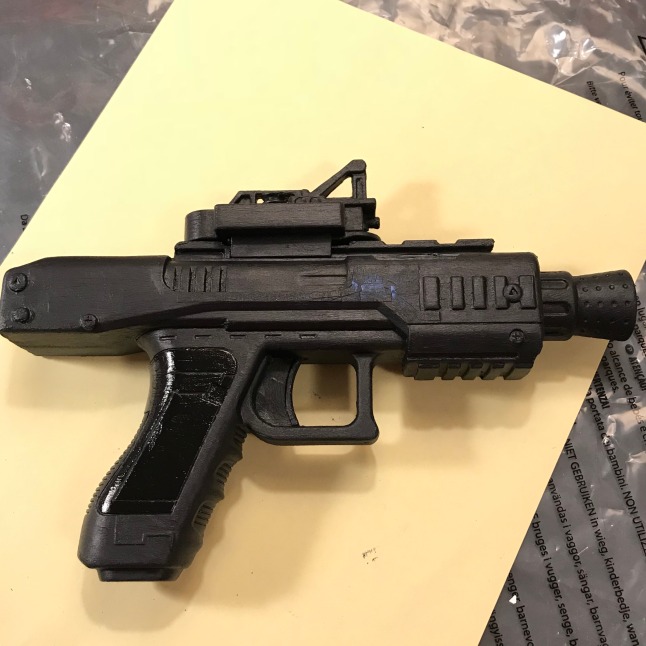 I used acrylic paint in Payne’s Gray for the entirety of the blaster. It has a somewhat matte finish, which is exactly what I wanted. It took about three or four coats to completely cover the blaster, but the paint dried quickly so I was able to paint the blaster fairly quickly.

For the shiny black parts, I used…wait for it…nail polish! Here’s the cool thing about nail polish: it’s enamel, and it comes in every color possible, and usually you can find it for pretty cheap. The kind I used was Wet ‘n’ Wild, so that’s about as cheap as you can get. Since I had already painted the entire blaster, I only needed to do one coat of black nail polish to get full coverage.

I used my trusty Shimmering Silver paint for the silver parts. Then, I painted the matte areas with a coat of matte Mod Podge.

I also decided to add a little special touch by completely destroying and rebuilding one of the darts that came with the blaster to create a red…laser? I don’t know. Something red. I cut up and re-glued a dart, and then painted the tip with red nail polish, and then glued it inside the barrel.

And…then it was done! 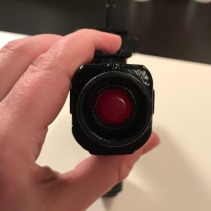 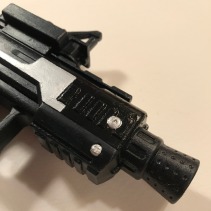 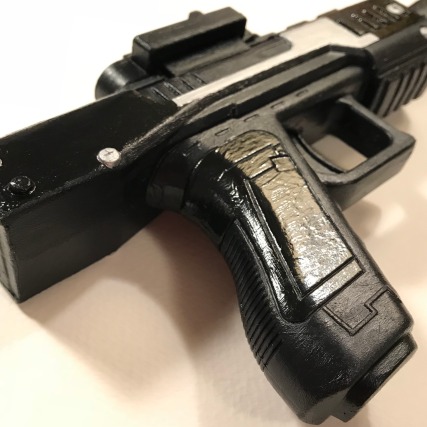 Here is the reference photo: 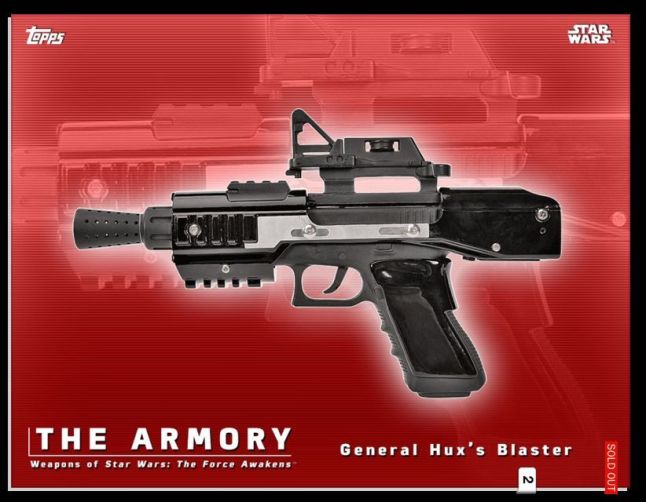 And here is the finished blaster:

There are obvious differences between the actual blaster and the Nerf version (mostly because of how it needed to be constructed so it could fire projectiles), but it makes for a fun prop for conventions or casual trooping. From a few feet away, it looks pretty cool. Up close…well, I know my painting job isn’t perfect, but it was a really fun project.

Hurry up and give me my Biscoff and ginger ale, you giant, hairy ape. #kyloren #chewbacca #starwars #wookiee #plane #delta #costume #cosplay
I volunteered with the @official501st @501stcentralgarrison and @rebellegionilumbase for the @pilotsforkids Fantasy Flight to the North Pole event this afternoon! I think we made quite a few folks happy today. I also got to sit in the cockpit of a brand new Airbus A321! It was so cool! #kyloren #thelastjedi #starwars #resistancepilot #501stlegion #rebellegion #volunteering #costume #cosplay #pilotsforkids #airplane
Happy Life Day! Lego Star Wars Holiday Special Poe is ready with the tip-yip! #starwars #lifeday #starwarsholidayspecial #poedameron #lego #tipyip #costume #cosplay
My friends told me to post this and tag @chrisevans in it, so I guess that’s what I’m doing. America’s Ass, meet Britain’s Ass. United Asses of America? I don’t know. This is the closest you’re gonna get to ✨spicy✨ content on this page. #peggycarter #captaincarter #captainamerica #steverogers #americasass #marvel #mcu #whatif
UTINNI! Just got home from filming the @wcco segment, but before I left I got a photo with R2 and R5 (Aimee and Meghan’s droids!) so that made my day even better. #jawa #starwars #droids #r2d2 #r5 #costume #cosplay #501stlegion #rebellegion
About to Jawa it up for a segment on the Star Wars groups in Minnesota for @wcco this morning! #jawa #starwars #501stlegion #501stcentralgarrison #rebellegion #rebellegionilumbase #costume #cosplay #volunteering #utinni