Each year, the Science Museum of Minnesota holds a Star Wars Day, and it’s always a huge hit with families! The 501st Legion and Rebel Legion make appearances, and since I’m not yet a member of the 501st Legion, I volunteered as a handler. Specifically, I was a handler for Chewbacca, my fellow costumer Paul’s newest costume. It was definitely a learning experience for both of us, but it was really fun! I have never seen kids get so excited over a costume. It was like walking around with a celebrity.

If I get 501st approval this year, then next year I get to be part of the troop for this event!

I’m usually the Hux to his Kylo, but on Star Wars Day I was keeping Paul from accidentally trampling little ones and getting knocked over by over-excited people.

After the Costumers for a Cause Launch Party, I switched costumes and headed to Grumpy’s for Kara-O-Con 3. I had a fantastic time hanging out with friends and singing karaoke to Radiohead’s “Creep.” 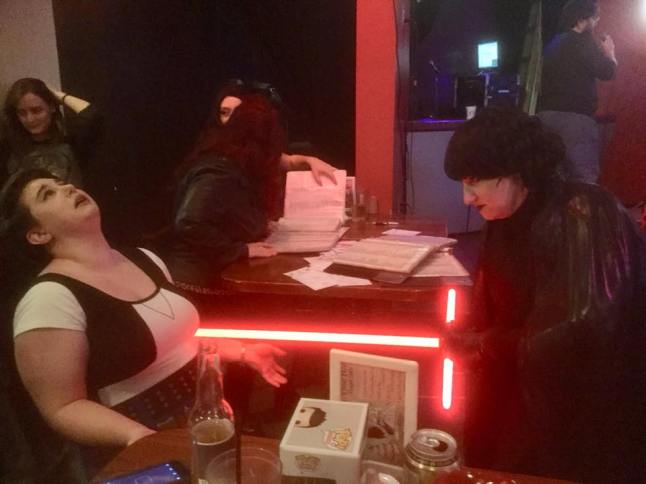 I killed my dad. Whoops. Photo by Kira Pontiff.

Photo by Rosemary Catherine Bell. Photobomb by Phil, Matt, and Paul (or Gilligan, Skipper, and Riker).

My reaction when asked to “make a Kylo Ren face.” Seems apt? Photo by Lindsey Rae.

Costumers for a Cause is a non-profit group that includes several costuming groups from the Twin Cities area: The Minnesota Force, Minnesota Superheroes United, and The Royal Sisterhood. We’ve been doing events for over a year as part of CFAC, but with a brand new website (designed by yours truly), we wanted to get word out about our organization and have an official launch party. It was a huge success, and everyone had a wonderful time! 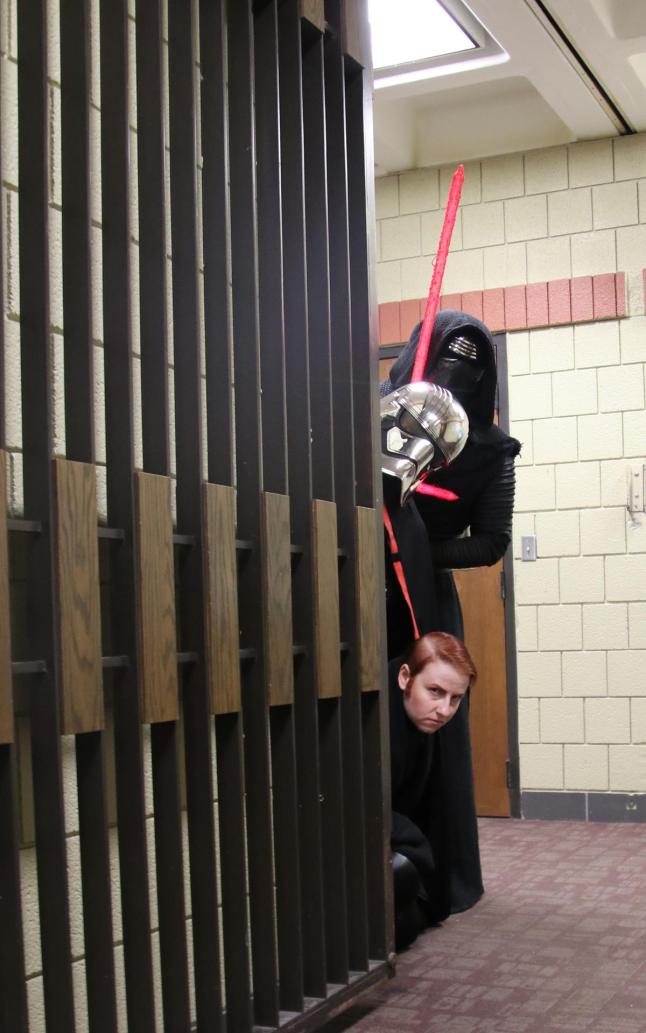 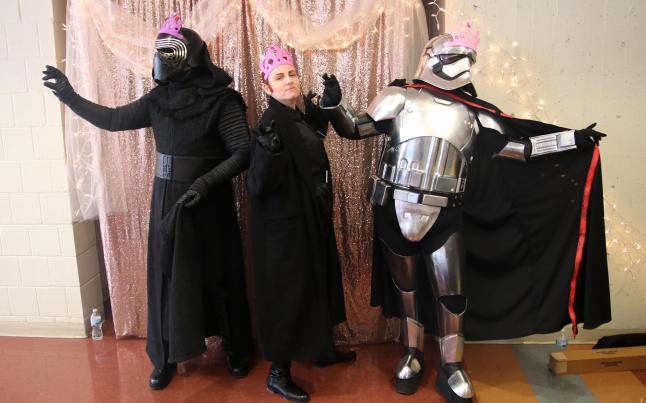 Last night I did a test run of my Fem!Kylo Ren makeup, including the scar. I decided to go with smoky eye makeup (using my Tarte Sex Kitten palette) and pretty much my usual day-to-day makeup for the rest. For the scar, I used Mehron’s Rigid Collodion to create the base. I did a few coats to make the scar a little deeper-looking. I used a pinkish/nude eyeshadow to make the scar look a bit pinker. Then, I used a medium brown eyeliner pencil and traced along the length of the scar, and then softly blended it to give the scar some depth and to stand out a little more.

I’m really happy with how it turned out! I had some fun taking photos, too. 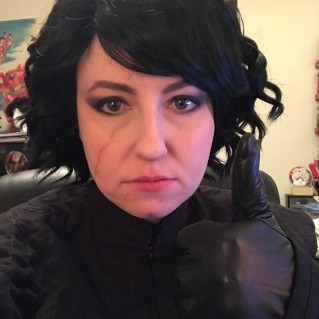 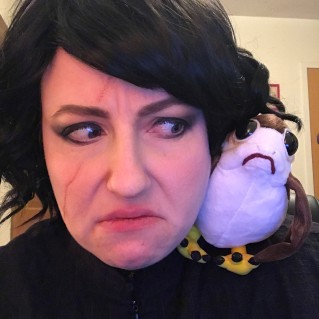 Kylo Ren approves, except when it comes to porgs.

TFW your parents don’t understand you and don’t believe it’s not “just a phase.”

Well, at least Kylo Ren has an eight-pack. And is shredded.

Sometime in late December/early January, I had a dream that I made a really cool genderbend Kylo Ren costume (complete with an awesome scar). I laughed it off because I’m not really a Kylo Ren fan. But, then I couldn’t stop thinking about it and how much fun it would be to create, and so I decided to go for it. My goal was to create the costume pieces close enough to the ones used in the movie, but not go too crazy trying to make them screen accurate – mostly because my skill level wouldn’t allow me to be able to perfectly recreate everything. As long as people could recognize who I was trying to emulate, then that would be good enough for me.

So, let’s break down the costume pieces!

Undertunic: I bought a black long-sleeved tee shirt from Target and removed the sleeves to use one as a pattern. Then, I bought a bunch of black linen-like fabric and used a sort of pintucking technique on two large pieces of the fabric to create about 26 1″ rows on each sleeve to give a sort of pleated look, but not actually creating pleats. While I used the sleeve from the tee as a base, I had to make it a bit bigger since the tee is made from knit fabric (so, super stretchy) and the linen I used had no stretch at all. With a little bit of adjustments, I made a mock-up pattern from some scrap fabric and cut out the sleeves from the pintucked fabric. Then, I just sewed them in place of the old sleeves in the tee. 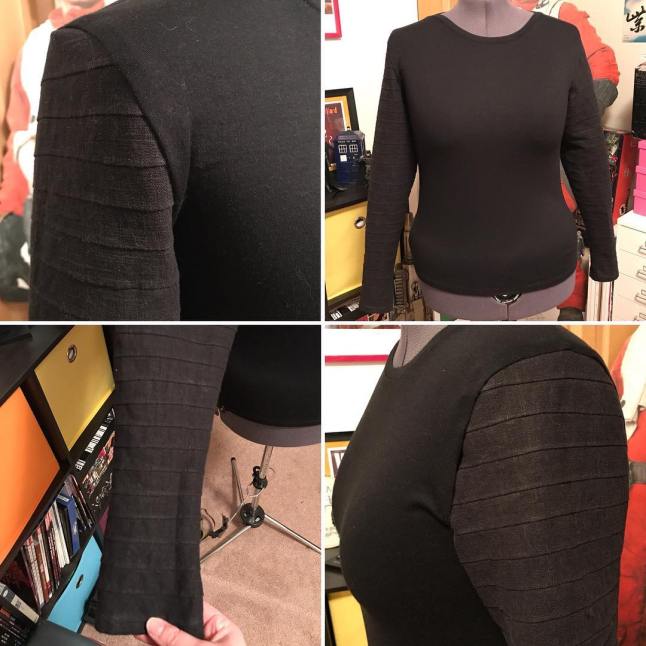 Vest: Using the Simplicity 1499 pattern as a base, I made a mock-up of the vest using an old bed sheet. I had to make quite a few adjustments: I had to make the front collar a bit higher, had to add some fabric to the underarm area, made the shoulders a bit pointier, created a whole new collar, and took in the sides a little bit. Once the mock-up was complete, I cut out the pieces from the same linen-like fabric I used for the undertunic, and then made a lining from black cotton fabric. The basic construction didn’t take too long, but then I wanted to create a quilted grid pattern. That part took quite a while, but I think it turned out well. 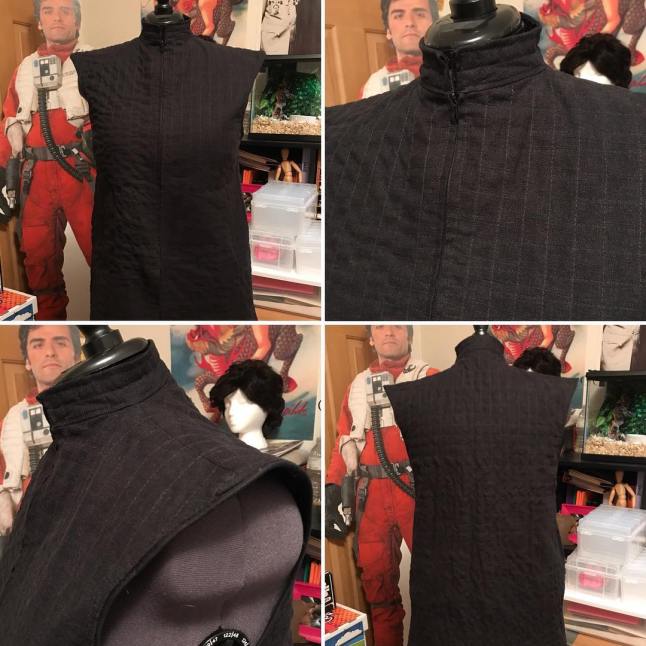 Cape: I bought this really cool stretchy black fabric that has sort of a wet look to it, so it’s somewhere between looking kind of metallic and also kind of like leather. I used Simplicity 8201 as the base for the cape (just the two back panels, really) and made a mock-up using an old bed sheet for the front two panels. Then, I sewed in woven cotton laces at the shoulders to create “opera straps” to tie behind my back to keep the cape on my shoulders.

Belt: I commissioned a proper Kylo Ren belt from my friend Paul at PHProps and it’s perfection.

Boots: I bought some cool boots off of eBay that have multiple straps. They’re awesome, and I plan on wearing them outside of my Kylo costume for sure!

Gloves: I used my black leather gloves from my General Hux costume.

Lightsaber: I went with the Black Series Force FX Kylo Ren lightsaber. I ordered handmade blade covers from KORSabercovers and they are REALLY awesome!

Makeup & Scar: For my makeup, I did a smoky eye using my Tarte Sex Kitten palette. The rest of my makeup was pretty much my normal daily makeup. For the scar, I used Mehron’s Rigid Collodion to create the base. I did a few coats of it. Then, I used a pinkish/nude eyeshadow to make the scar look a little pinker, and then used a medium brown lipliner pencil (softly blended) to add depth to the scar. 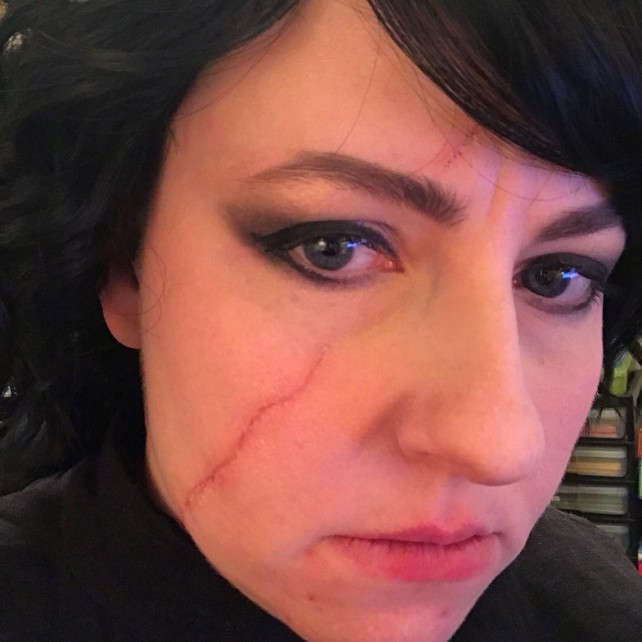