I think this may have been the most fun CONvergence I’ve attended. I was afraid it was going to be affected by all of the restrictions the DoubleTree put in place, but I had an awesome time. I’m sure it’s because of the wonderful company of friends. Anyway…recap time!

For the first time, I ended up wearing multiple costumes every day, so that added a little chaos to my schedule. I started off with Kylo Ren.

Hanging out with Lindsey and Amanda on the balcony of the Mos Icee Cantina. Photo Credit: Lindsey Rae.

After tracking down friends and saying hello, I went back to the hotel room and switched into my newly-updated Catwoman costume. For the first time, Dane wore a costume to CONvergence! He put together a Joker goon from the 1989 Batman movie. Then, we headed back out to meet up with friends. We also did a mini DC universe photoshoot! 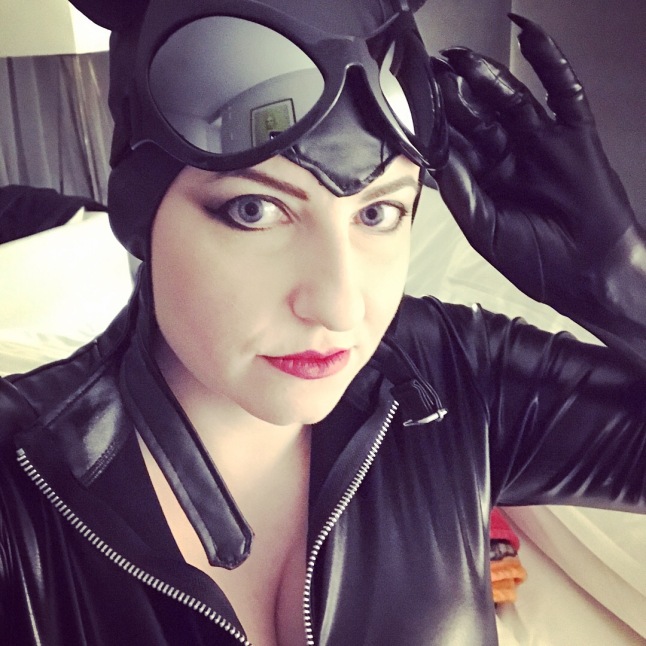 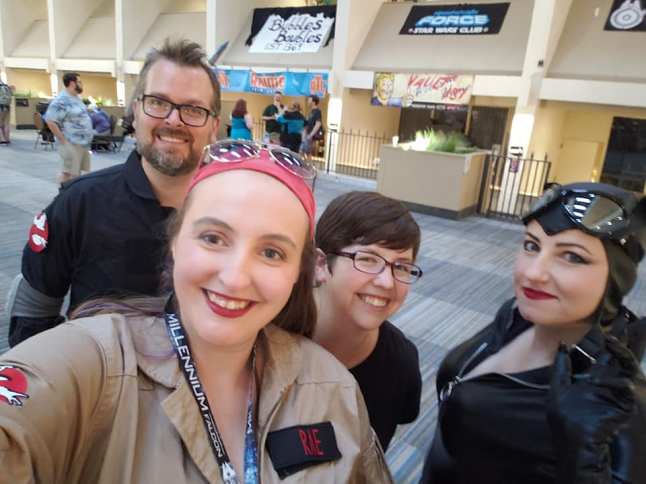 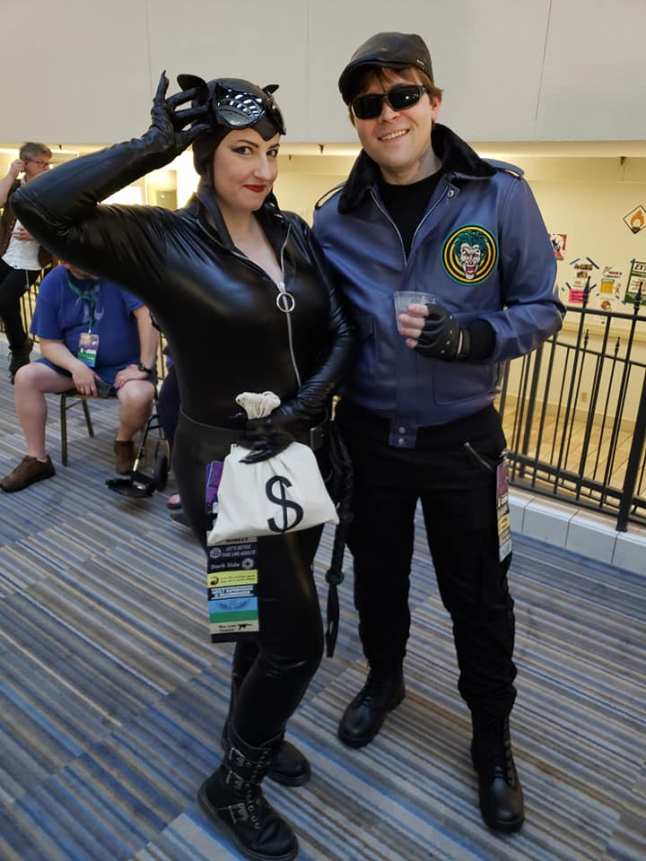 With Dane as a Joker goon! I love how his costume turned out. He got a ton of compliments! Photo Credit: Lindsey Rae. 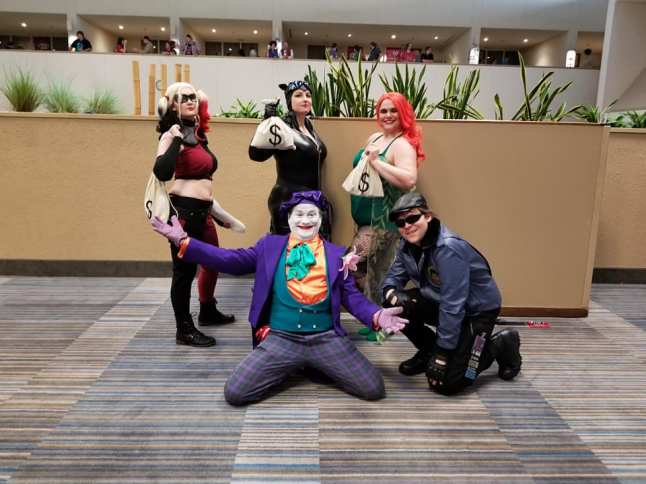 I started off dressed as General Hux and went to the Minnesota Force lunch. Afterward, I hung out for a little bit at the DoubleTree. 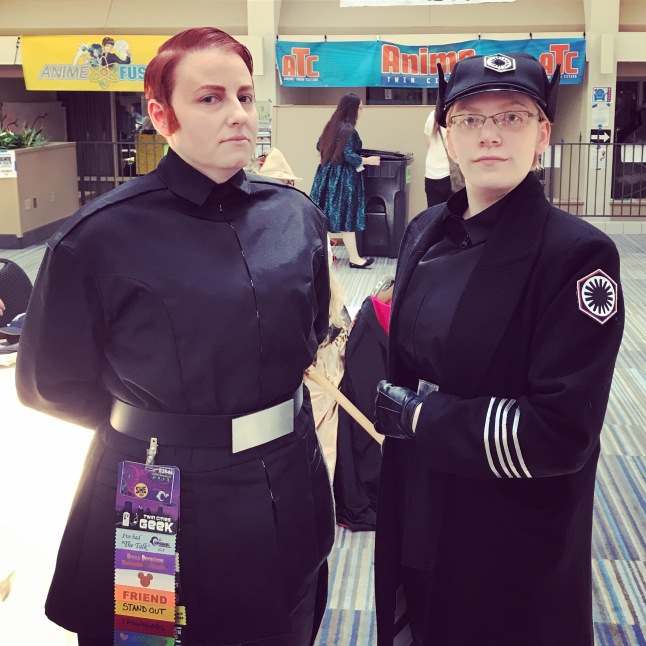 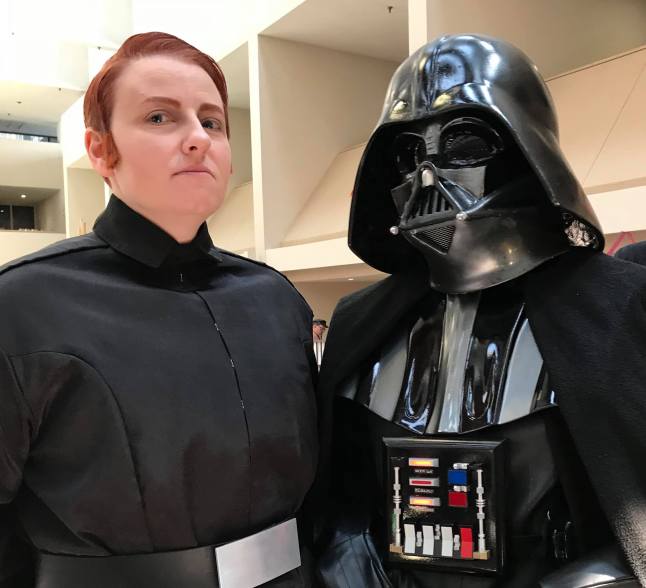 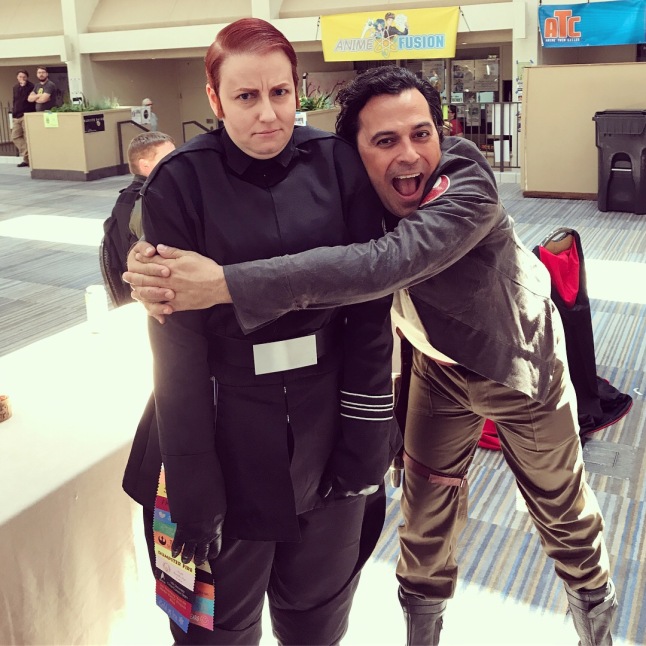 Then, I switched super briefly into my Admiral Ackbar costume for about an hour. 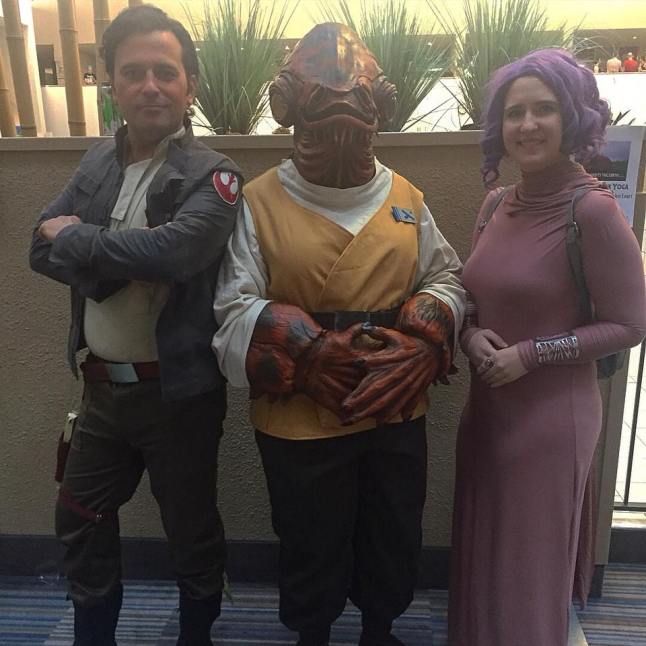 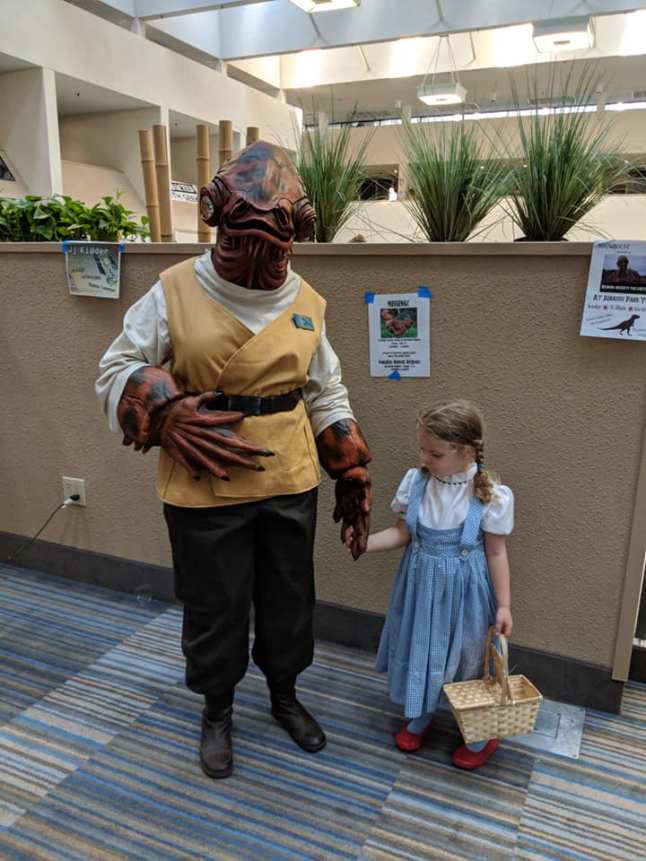 Even in a full mask, Molly still seems to know who I am. Photo Credit: Amanda Fineran.

After wandering around a bit as Ackbar, I switched into Scarlet Witch and ran back over to the DoubleTree to catch my friend Kate’s performance as part of the ChromAtics. It was awesome, and I’m so glad I didn’t miss it. (I nearly did.) 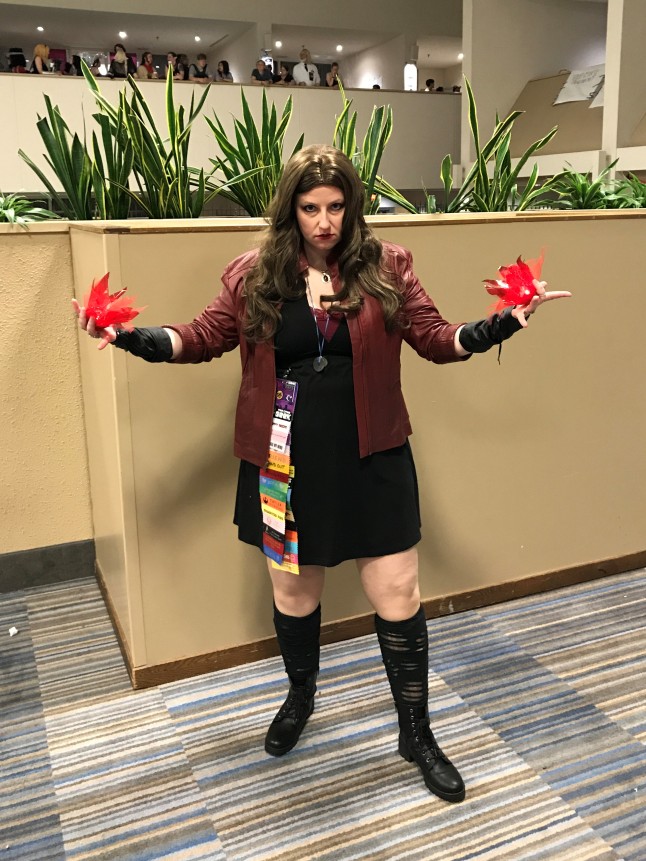 Don’t mess with me.

Paul had a conflict and couldn’t be part of the “Costuming for a Cause” panel, so I sat in for him. So, for an hour, I was Not Paul…despite what the name card said. 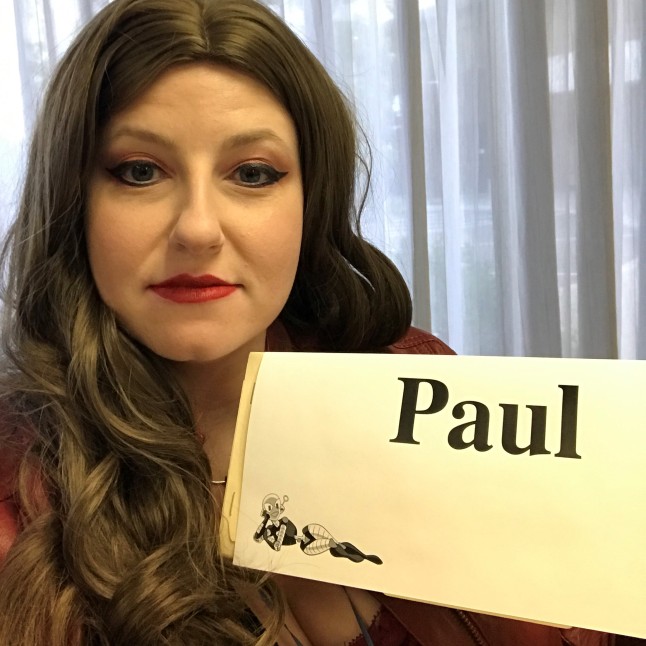 Costuming for a Cause panel. Photo Credit: Todd Murray.

The panel went well, and we had a few people in the audience. I had a great time! 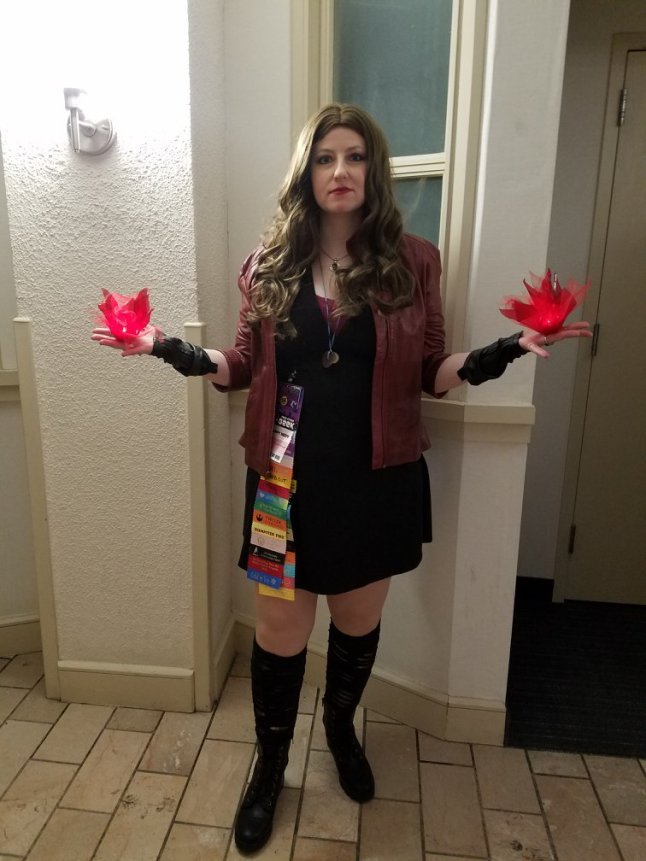 Later in the evening, Paul and I wandered around as Winter Soldier and Scarlet Witch (the debut of the Adventures of Bucky and Wanda) and took some fun photos out in the DoubleTree parking lot.

Don’t you hate it when someone recites the trigger words and Cap is nowhere to be found so you have to fight off the Winter Soldier alone? Yeah, me too.

Saturday afternoon was the Star Wars photoshoot, so I got into my Admiral Ackbar costume and headed to the photoshoot. 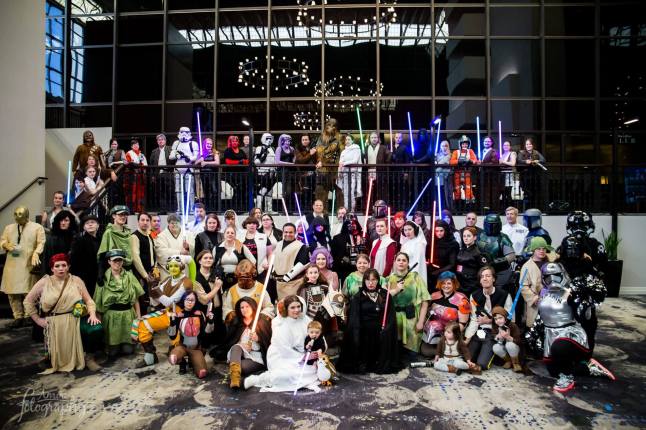 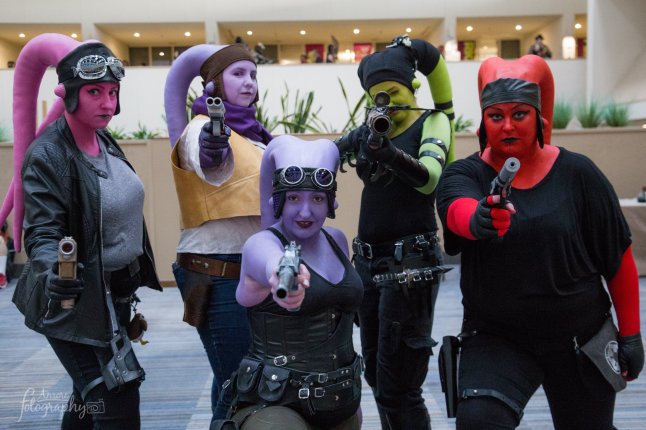 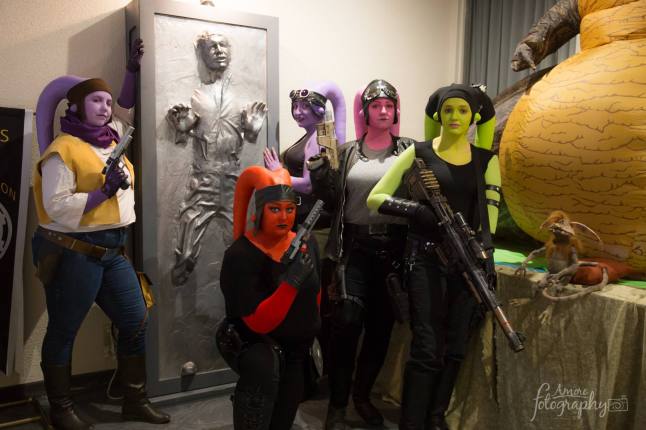 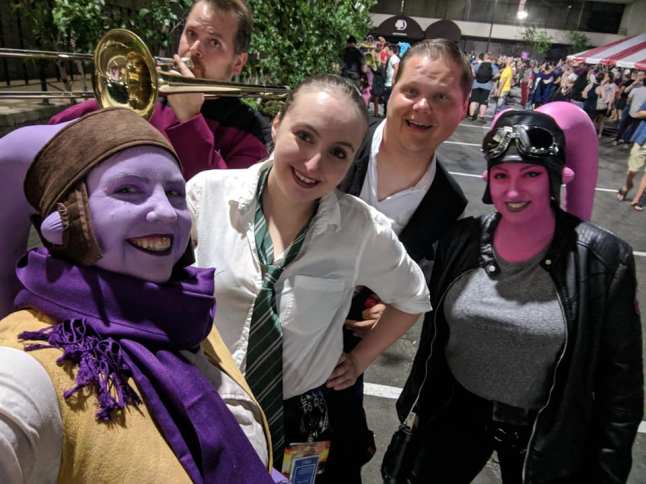 Sunday is always the kind of half-assed lazy day. Dane and I checked out of the hotel and then wandered around the dealer’s room for a bit. Then, we called it a day and went home to nap off the entire weekend.