For my 1970s Black Widow costume, I needed to figure out a way to make her gold cuffs. They’re bullet-like, but not quite, so I had to do some brainstorming. I ended up coming up with an idea that uses Nerf darts as the base. 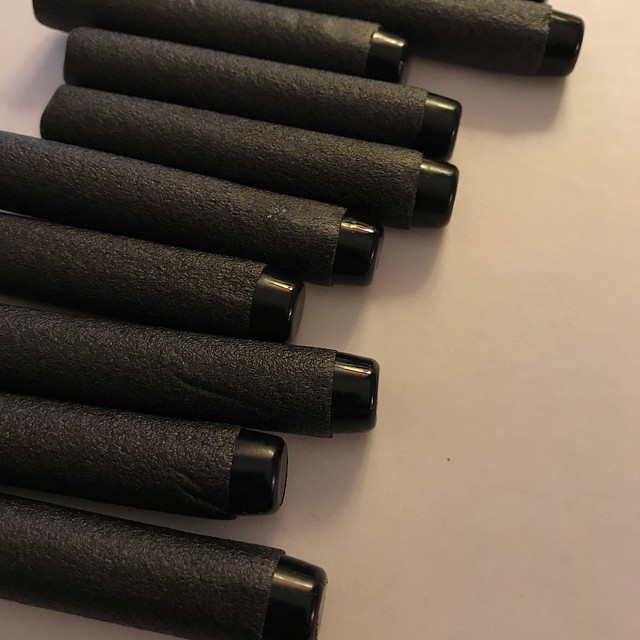 You can probably use Nerf darts in any color and then paint them, but buying them in black saved me a lot of time. I had to buy a pretty large quantity (200 of them) but I actually have Nerf guns that use these, so they won’t go to waste. (My cat Jack loves chasing them around the house.) 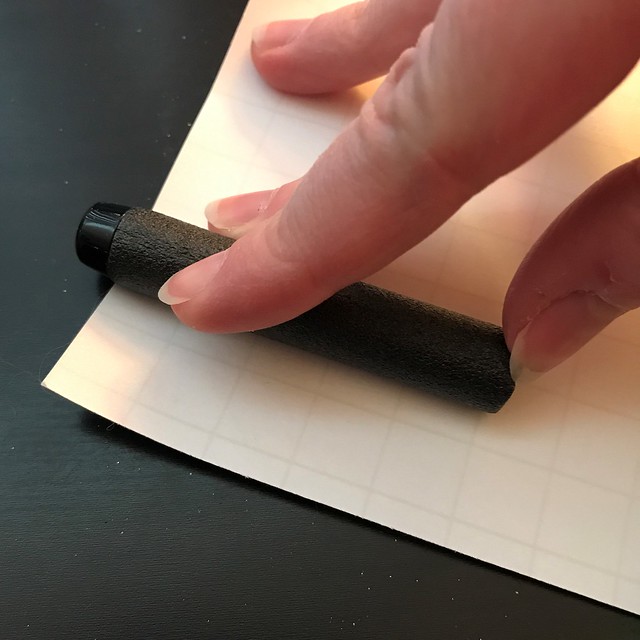 Unroll the adhesive foil and lay out one of the darts to see how wide you need to cut the foil. My darts ended up being 2 1/2″ long (excluding the plastic tip) so I was able to cut along right on the grid. I cut out a few strips at this width. 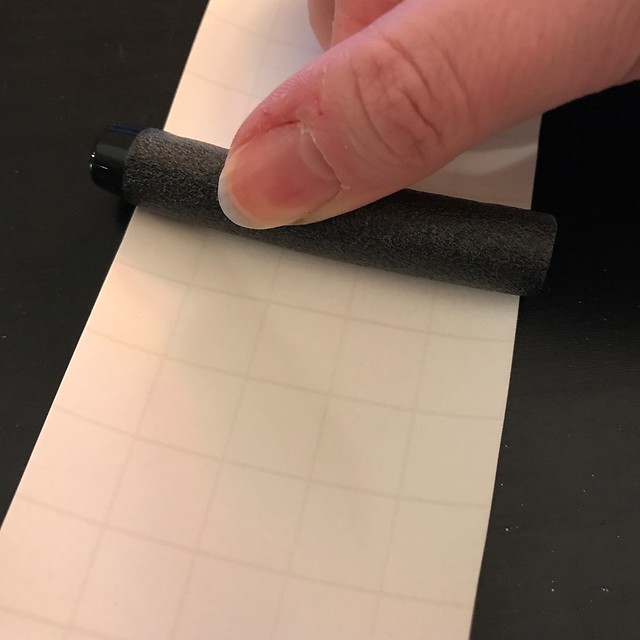 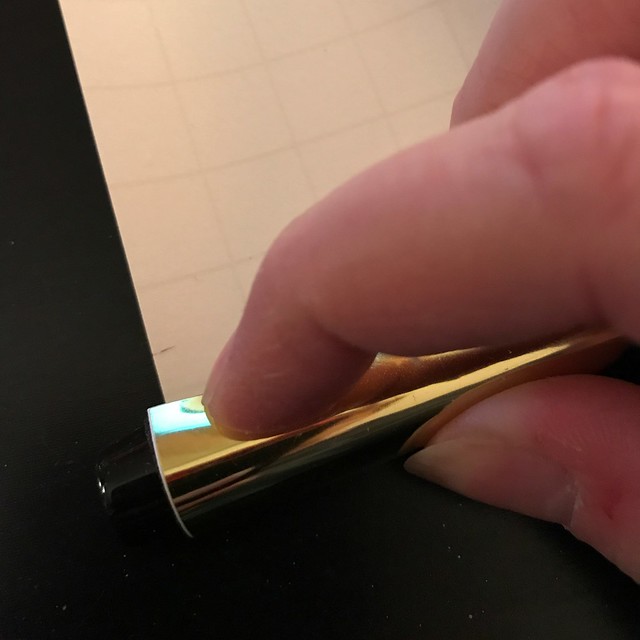 Next, wrap the adhesive foil (with the backing still attached) around one of the darts to see how long of a piece you’ll need to cut so that the foil would wrap completely around the dart with a little extra to overlap. Make a little mark on the grid side of the paper with your pencil, and cut across with your scissors. 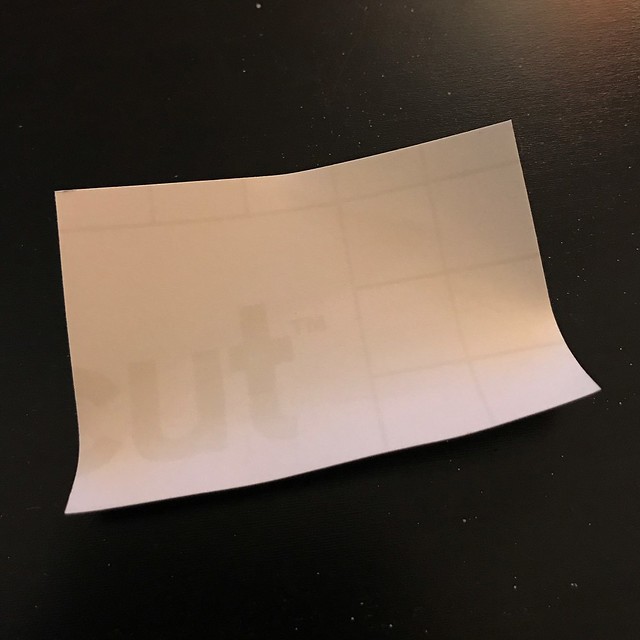 This is what I ended up with. I think the piece ended up being 2 1/2″ x 2″ to cover the dart. Repeat the steps to cut out a bunch of little “wraps” for the darts using the first wrap as a template. 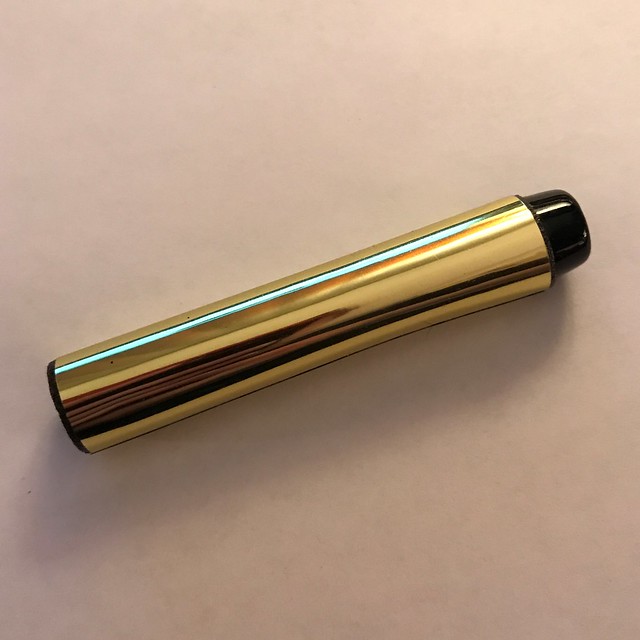 Peel the backing off of the adhesive foil, and wrap your dart in it like you’re rolling a sushi roll or burrito or something. Make sure you don’t cover up the plastic tip! You only want to cover the foam part. Don’t worry if the foil doesn’t quite line up to the edges – you won’t be able to tell once everything is done. Repeat the process for all of your darts. 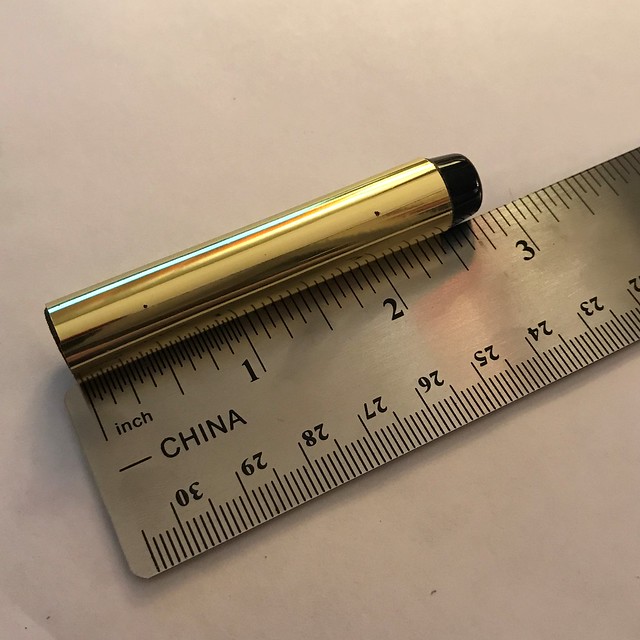 Lay your first dart along the edge of your ruler and make a little dot with your Sharpie 1/2″ in from the bottom and 1/2″ in from the top (excluding the plastic tip). To make it easier, I put the dots right on the edge where the foil wrap ended, since that made for a nice straight line to work with. Repeat this process for all of your darts. 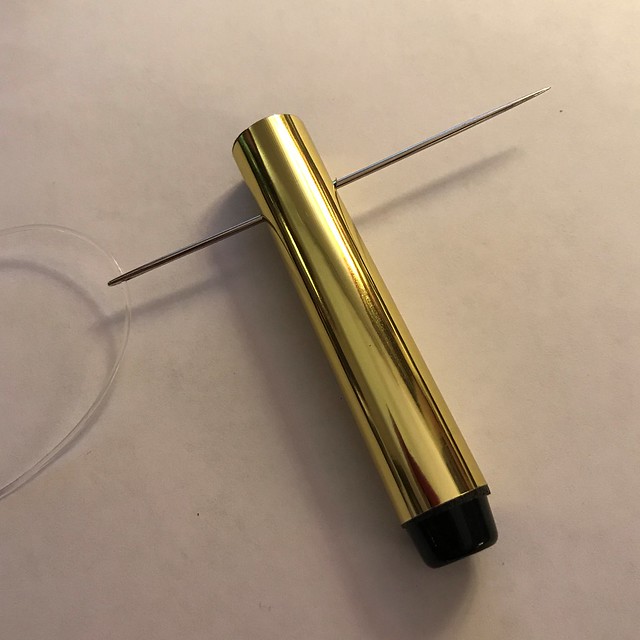 Cut your elastic cord into four 1-foot pieces. You will need two lengths of cord per cuff. Thread your needle with one piece of cord, and then poke the needle right through the dart at the first dot you made. Make sure to poke straight across and not at an angle. 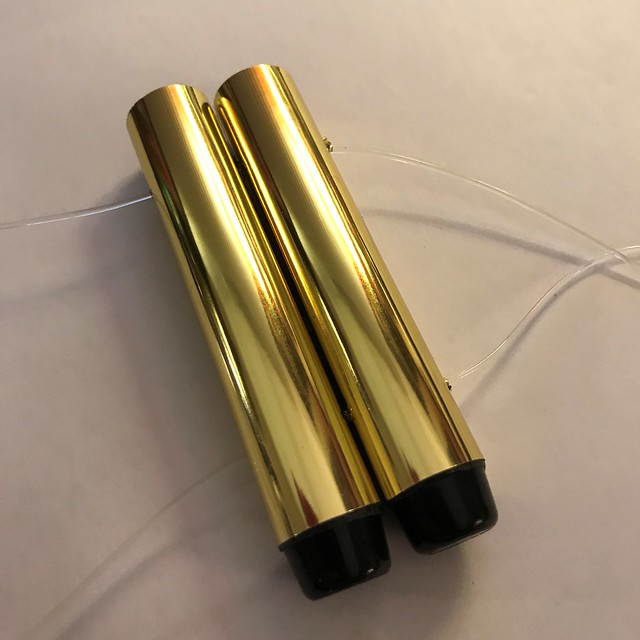 If you have two needles, then thread the second needle with a second length of cord. If you only have one needle, then unthread it from the previous step and thread it onto the second length of cord. Poke the needle through the second dot you made (again, making sure you poke straight across and not at an angle). Repeat this process for the rest of your darts until the length is large enough to completely wrap around your wrist. 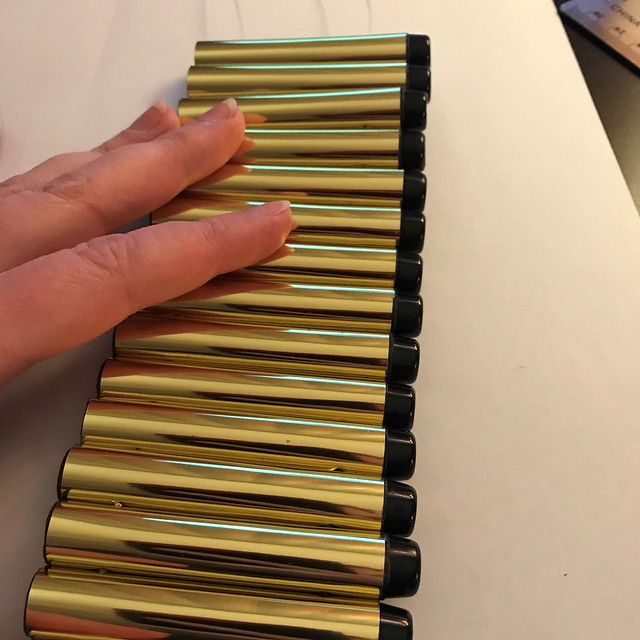 This is what my darts look like strung together. I used 16 per wrist, and I have about 6 1/2″ wrists. 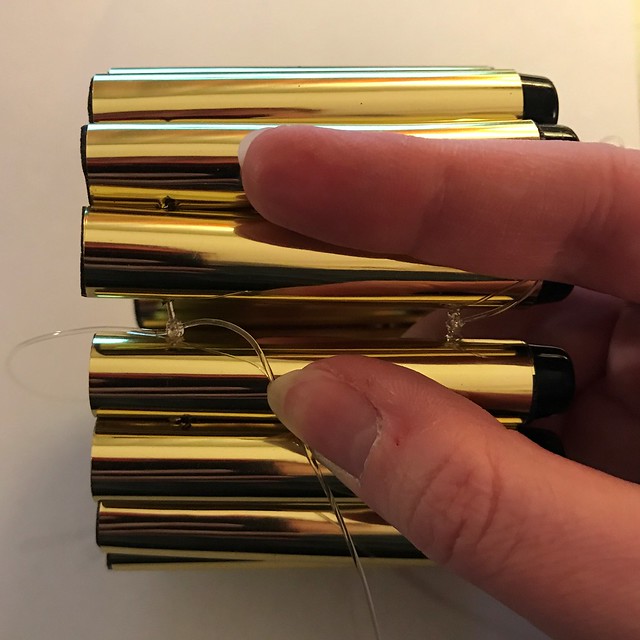 Tie the cords together into knots (instructions can be found here). I tied mine three times (so, basically a square knot plus an additional overhand knot). Stretch the bracelet enough to expose the knots and use clear nail polish (or super glue) to coat the knots. You can wedge a pencil in-between the darts to keep the knots exposed until the nail polish dries. The nail polish acts as a sealant so the knots don’t come undone. 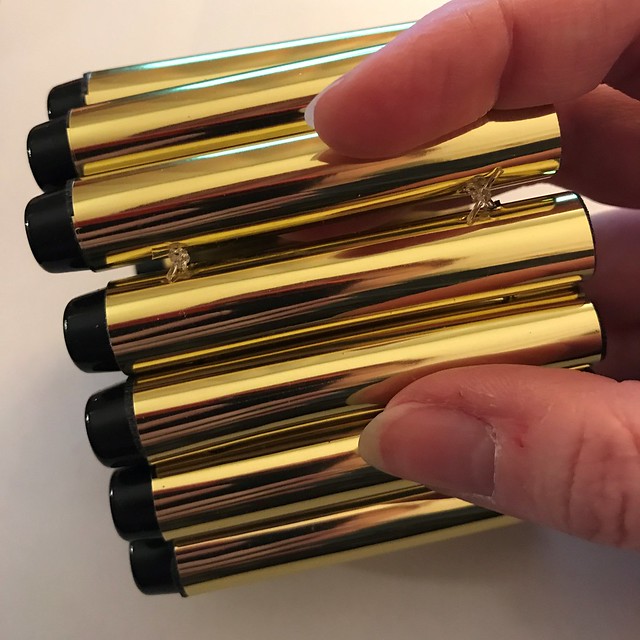 Once the nail polish has dried, snip the excess cord (leaving a few millimeters of cord sticking out) and apply another coat of clear nail polish, if you wish.

Your first cuff is complete! Repeat the process for your second cuff, and you’ll be all set! The nice thing about these cuffs is that they’re incredibly light, so they’re comfortable to wear.

Hurry up and give me my Biscoff and ginger ale, you giant, hairy ape. #kyloren #chewbacca #starwars #wookiee #plane #delta #costume #cosplay
I volunteered with the @official501st @501stcentralgarrison and @rebellegionilumbase for the @pilotsforkids Fantasy Flight to the North Pole event this afternoon! I think we made quite a few folks happy today. I also got to sit in the cockpit of a brand new Airbus A321! It was so cool! #kyloren #thelastjedi #starwars #resistancepilot #501stlegion #rebellegion #volunteering #costume #cosplay #pilotsforkids #airplane
Happy Life Day! Lego Star Wars Holiday Special Poe is ready with the tip-yip! #starwars #lifeday #starwarsholidayspecial #poedameron #lego #tipyip #costume #cosplay
My friends told me to post this and tag @chrisevans in it, so I guess that’s what I’m doing. America’s Ass, meet Britain’s Ass. United Asses of America? I don’t know. This is the closest you’re gonna get to ✨spicy✨ content on this page. #peggycarter #captaincarter #captainamerica #steverogers #americasass #marvel #mcu #whatif
UTINNI! Just got home from filming the @wcco segment, but before I left I got a photo with R2 and R5 (Aimee and Meghan’s droids!) so that made my day even better. #jawa #starwars #droids #r2d2 #r5 #costume #cosplay #501stlegion #rebellegion
About to Jawa it up for a segment on the Star Wars groups in Minnesota for @wcco this morning! #jawa #starwars #501stlegion #501stcentralgarrison #rebellegion #rebellegionilumbase #costume #cosplay #volunteering #utinni