We had another premiere event for Black Widow on July 9th, but this time we were at Emagine Theatres in Lakeville. We had a great time! The movie was great, too.

Adding to my growing collection of Natasha Romanoff/Black Widow costumes, I decided to put together her look from Captain America: The Winter Soldier. This is definitely one of my favorite costumes! I hope to get some good photos of my costume soon.

Suit: I ordered mine off of eBay, and the particular seller doesn’t seem to sell it anymore, sadly, but I know there are a lot of other vendors that make this suit. The suit ended up being a little big in areas, so I had to do quite a bit of tailoring, but I think it looks decent.

Boots: These are the same Intaglia “Brooklyn” boots that I seem to use for a bunch of my costumes. I wish these were still made so I could buy a few more pairs as backups.

Widow Bites: These are from Etsy, and are actually The Avengers-style, but they still work well for the costume.

Belt Buckle: This is from the same Etsy shop as the Widow Bites.

Belt/Holsters: This whole rig is a mix of random pieces. The main belt is a tactical belt from Amazon, and the holsters were made with 1 1/2″ black webbing, two plastic buckles from Amazon, left and right Blackhawk Sherpa holsters, and I salvaged some of the decorative bits from the belt that came with my suit and added them to the belt as well.

Gloves: These are a pair of tactical gloves from Amazon.

Wig: I bought the wig from Amazon, but it doesn’t appear to be available anymore.

One night in the middle of a Facebook Messenger chat with my friend Paul we came up with the idea of doing a photoshoot of the bridge battle scene in Captain America: The Winter Soldier. Since Natasha isn’t in her Black Widow costume for that scene, I said, “Oh, I’ll just put together her look from that scene.” Because…why not? We still haven’t had a chance to do this photoshoot (thanks, pandemic) but we will soon, hopefully!

Jeans: These are the Torrid Luxe Skinny Jean in Black, but I don’t know if they make these anymore (which is a huge bummer, because they are SO comfortable).

Boots: I bought these boots years ago from Target, so they’re definitely not available anymore.

Tank Top: This was another Target find a few years ago. It’s just a basic black tank top.

Wig: The wig is from Amazon, but it doesn’t look like it’s available anymore. I have seen very similar wigs on Amazon, though.

Arrow Necklace: I bought mine from Etsy.

I’ve always loved the look of classic 1970s Marvel Comics Black Widow – just that sleek bodysuit with the gold accents! So, I thought I’d put this costume together once and for all.

Bodysuit: This is actually the same type of bodysuit I used for my Catwoman costume. I modified the zipper by replacing the existing zipper with a gold/brass-toned zipper (I think it was one I salvaged from my first version of my General Hux costume, actually). For the gold ring, I bought some chunky rings off of Etsy.

Wig: This is the Hestia wig in Dark Red from Epic Cosplay Wigs.

Belt: I made it from splicing together two metal circle belts from eBay (it doesn’t look like the seller is offering them anymore, sadly) and attaching them to 1″ black webbing secured with Velcro.

Widow Bites: I made them out of foam Nerf darts, metallic gold Cricut paper, and elastic. See my tutorial here!

Boots: I’m using a different pair of boots than the ones I’m wearing in the picture above. I’m using these boots, now.

Gloves: The gloves I bought from eBay don’t appear to be available from the seller anymore, but they were Music Legs brand wet-look gloves. They’re wrist-length. 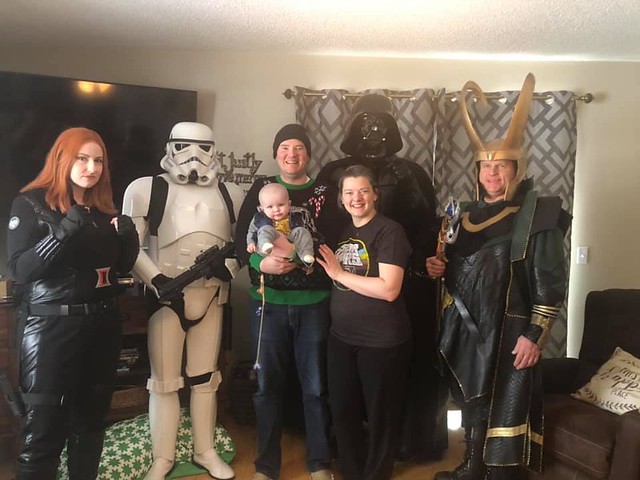 Us with Brice and his amazing parents. Photo Credit: Chris McArdle.

On February 12th, there was an urgent call out to Star Wars and superhero costumers to do a special home visit for Brice, a boy who is suffering with a terminal brain tumor. His parents were told he only has about two months or so to live, and so it’s become their mission to create a “bucket list” of fun things for him to experience. One of those was to meet some costumed Star Wars and superhero characters, and that’s where we came into the picture.

I’ve done a lot of events at children’s hospitals and the like, and those are always difficult because seeing children go through such pain and suffering breaks my heart, but I know that I can help make at least a few moments of their lives more fun. In those situations, I don’t necessarily know which of those sweet kiddos is battling a terminal illness. In this case, I knew I’d be meeting a little one who didn’t have much time left here on this Earth, and knowing that made it much more difficult…but it also made it that much more important that I put on a smiling face and help out a family in need. 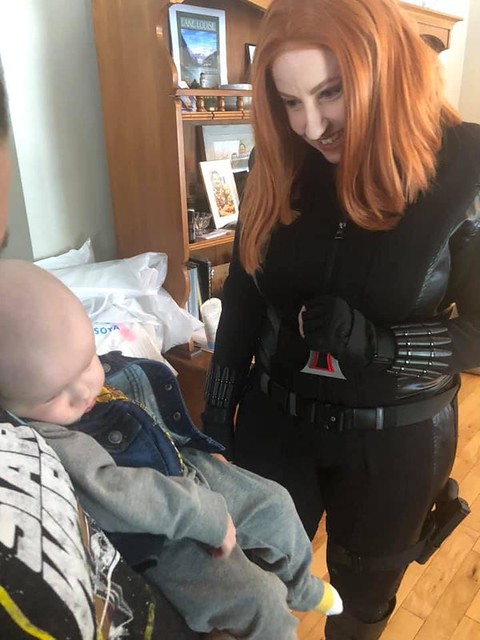 Meeting Brice was fantastic. He is the most chill, most content little dude I have ever met. He was all smiles and wonder and didn’t seem at all intimidated by Darth Vader (he really liked his “buttons”) or any of us silly costumers. I also can’t say enough wonderful things about his parents – they adore Brice so much. 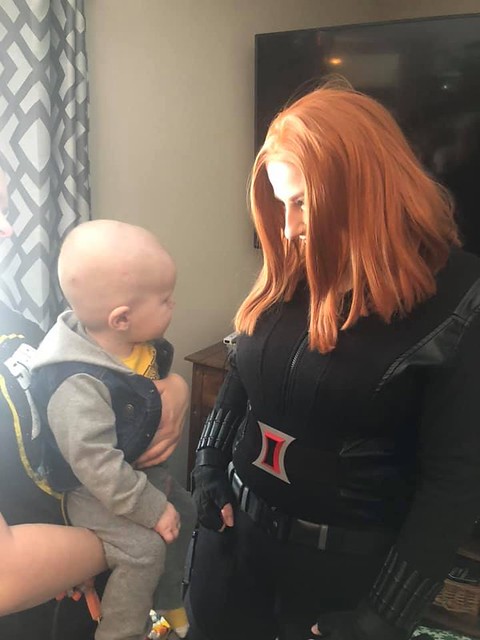 Brice’s adventures are continuing, and you can keep up to date on his “bucket list” and his health updates by visiting his Caring Bridge website. 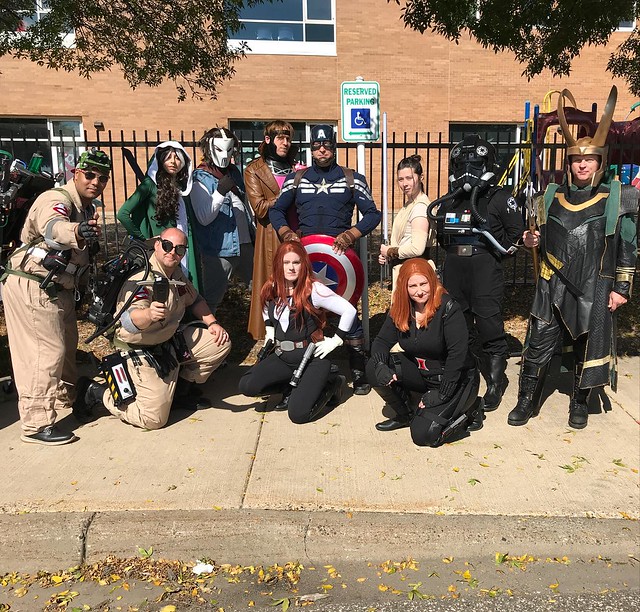 Costumers for a Cause to the rescue!

On September 28th, Costumers for a Cause appeared at the East Side Community Festival. A few days prior, I saw a post on a local geek Facebook group from someone who tried to hire another group of costumers to appear, and they canceled last minute. So, I got the word out to the CFAC groups and we pulled together to bring superheroes, Ghostbusters, and Star Wars characters to the event. We had a great time! 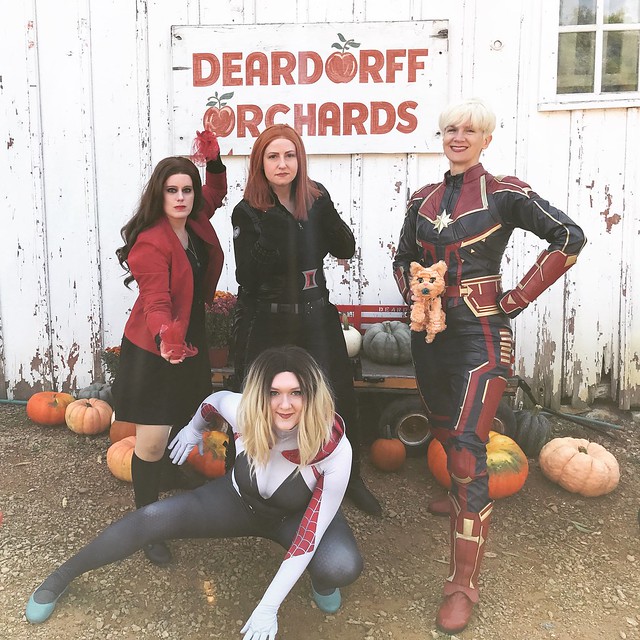 On September 14th, I attended Apple Pick’n Days on behalf of Minnesota Superheroes United. It was a beautiful day! There was a pretty good turnout when we arrived. I hope the families had fun! 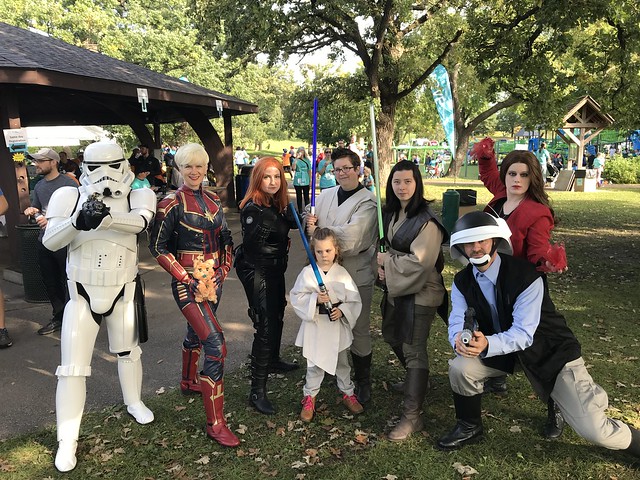 On September 14th, I attended the Minnesota Ovarian Cancer Alliance‘s “Teal Strides” walk as part of Minnesota Superheroes United. It was a gorgeous morning, and we had fun interacting with the walkers!

On August 14th, Anthony Russo stopped in Minnesota for the We Love You 3000 tour. One of the stops was at Best Buy Headquarters to give a talk to the employees there, and Minnesota Superheroes United were asked to appear in costume. It was really cool to hear him talk about the MCU movies he and Joe directed.

He stopped to take photos with us and complimented us on our costumes (eeee!) and was just super wonderful.

On July 25th, I appeared with Minnesota Superheroes United on Kids Clubhouse at Children’s Minnesota. While I’ve done this before several times with the Star Wars groups, this was my first time doing it as part of MNSU. It was super fun (as always)!