On March 23, all of the Costumers for a Cause groups appeared at HungerCon at Hallie Q. Brown Community Center. It was a beautiful day! The con wasn’t as busy as it was a couple of years ago, but we still had a good time. I wore my Scarlet Witch costume (which I haven’t worn in a while!) and finally got a photo with Jordan in her Quicksilver costume. (Siblings reunited!) 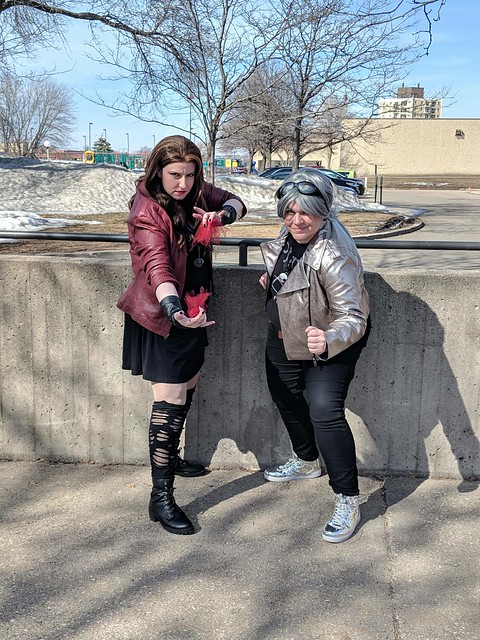 Captain America: The First Avenger is one of my favorite movies, and I immediately fell in love with Peggy Carter the first time I saw the film. Sure, she’s Steve’s “best girl,” but she is incredibly intelligent, capable, powerful, and a complete badass. She’s no damsel in distress, and that’s what I love about her.

Jacket/Jacket Belt/Skirt: I bought the Peggy Carter costume from CosplaySky and didn’t expect much, but it ended up being really nice. The blouse and belt for the skirt were not quite the quality I wanted, but the jacket, jacket belt, and skirt were all great. I removed the SSR “pins” from the jacket because they weren’t pins: they were just sewn-on fabric.

SSR Pins: I bought this pair of pins from eBay.

White Shirt: I bought this ASU shirt (probably not quite screen accurate, but better quality than the shirt that came with the rest of the costume).

Skirt Belt: Even though you can’t see it because it’s hidden under the jacket, I bought a brown belt that looks pretty close to the one she wears in the film. This is the belt I bought, but it doesn’t appear to be available in brown anymore.

Shoes: I bought these shoes in “Chestnut” from JCPenney.

Wig: I bought the Aries wig from Epic Cosplay Wigs in “Dark Brown” and did a ton of styling to it. It’s not quite right, but it’s close (for now).

Lipstick: I bought the screen-accurate Besame Cosmetics lipstick in “Red Velvet.” It’s by far my favorite shade of red I’ve ever worn, and I wear it a lot!

Nail Polish: I bought the screen-accurate O.P.I. nail polish in “Cinnamon Sweet.” It was a limited run, so it’s not terribly easy to find, but I bought an unopened bottle on eBay.

Nylons: I just wear a pair of nude nylons with the costume – even though I probably should have seamed nylons. 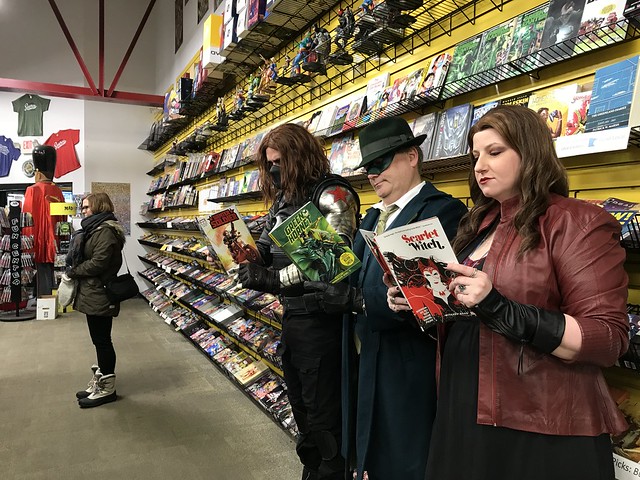 On December 8th, I joined Minnesota Superheroes United at Source Comics & Games for their Holiday Jubilee. We may have had way too much fun taking photos with their comics and collectibles. 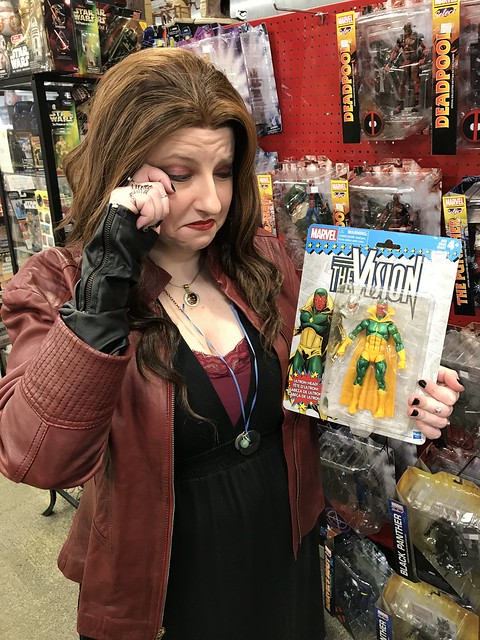 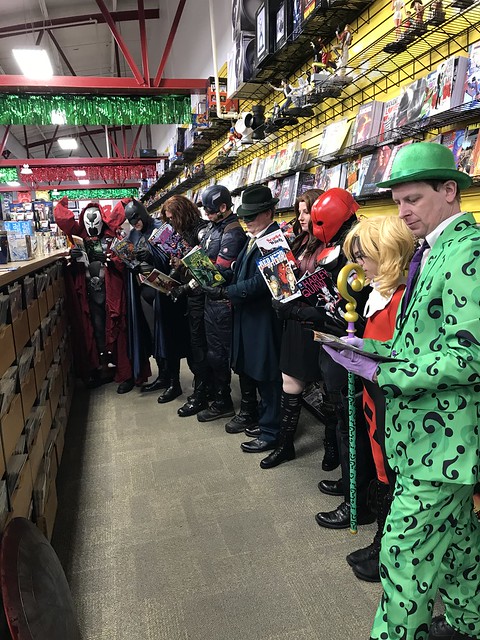 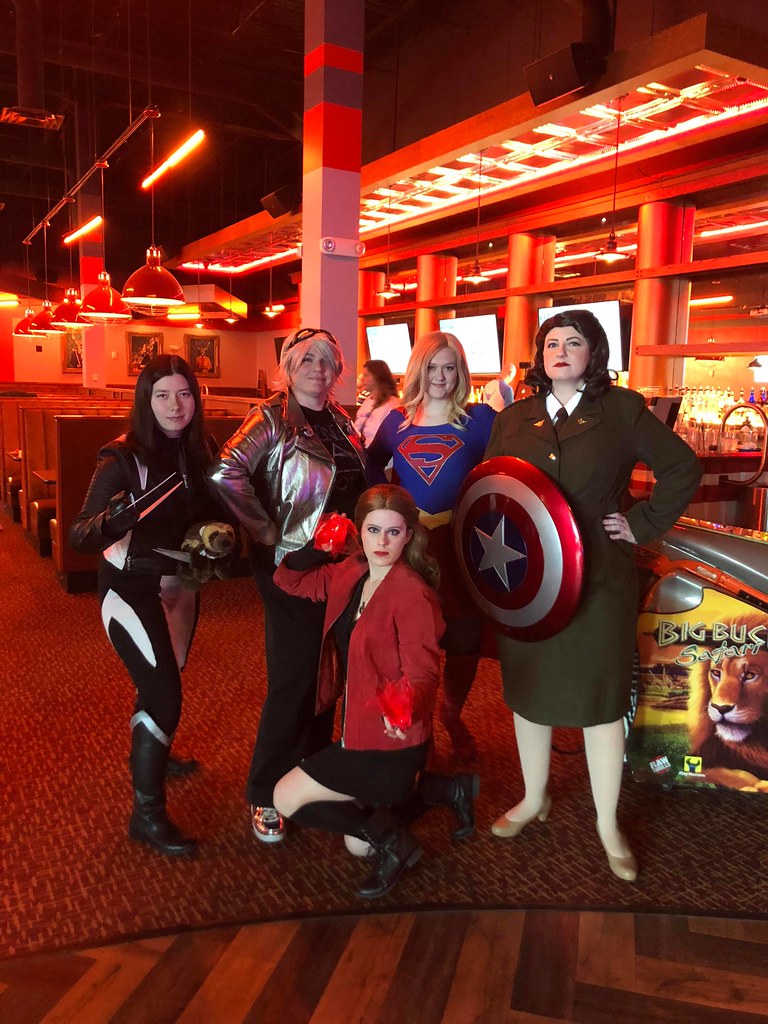 On November 3rd, I joined Minnesota Superheroes United at the Lanes for Friendship event for Highland Friendship Club. The event was held at Bowlero. We mingled with the attendees, and they encouraged us to bowl, so we did! 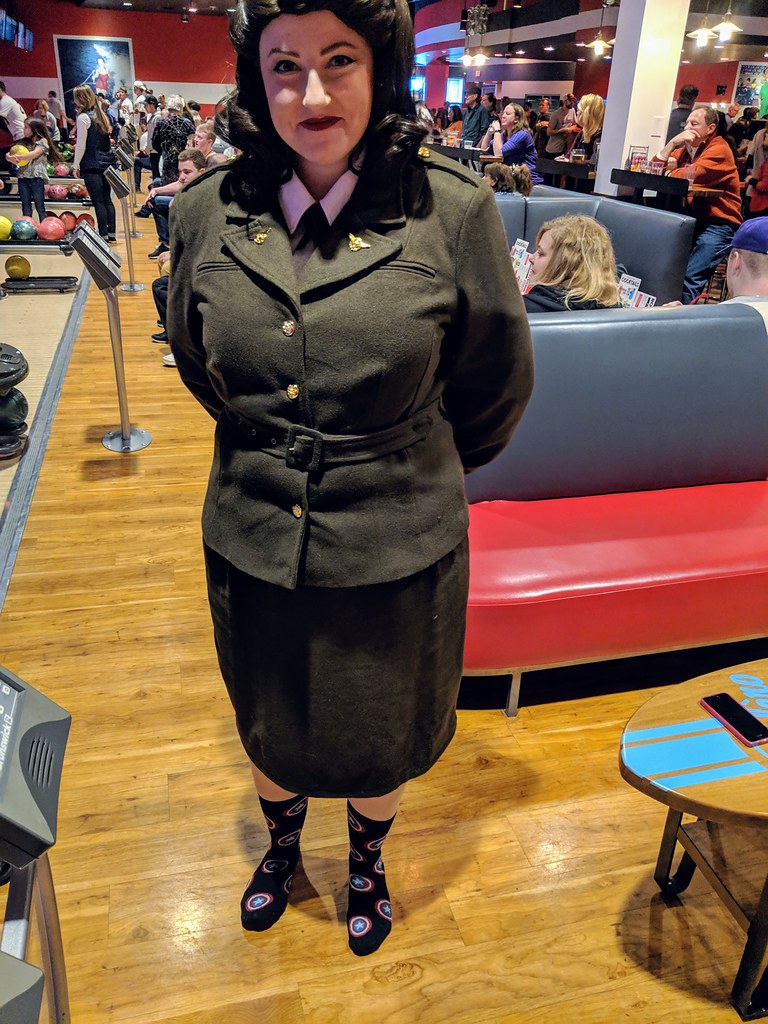 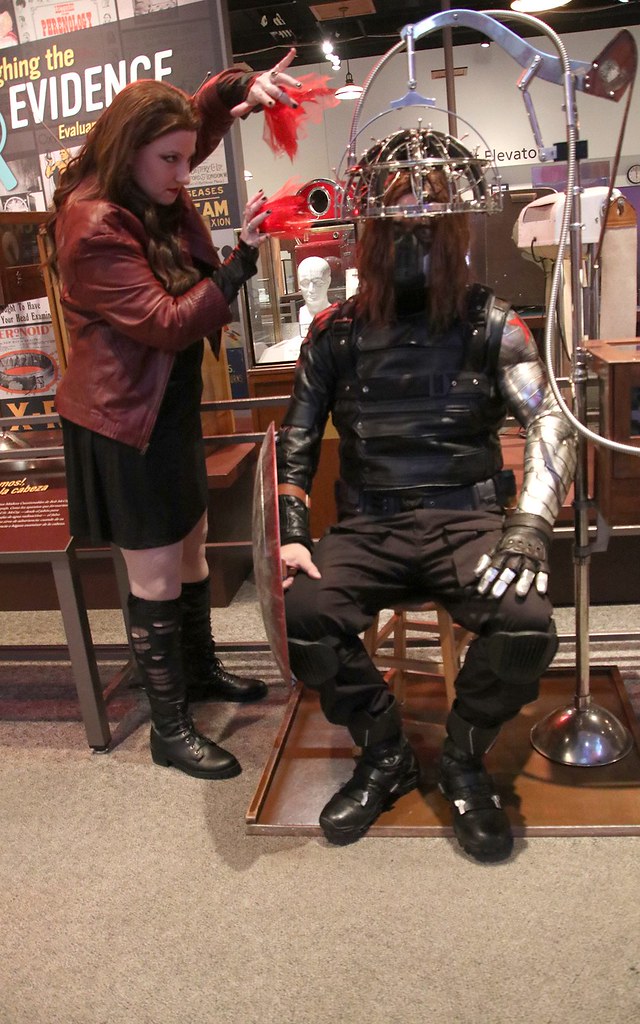 On October 11, the Science Museum of Minnesota had a “Sci Fi Con” event as part of their Social Science series. I volunteered as part of Minnesota Superheroes United, and pretty much spent the evening playing with the exhibits and being a giant goofball. It was a blast! 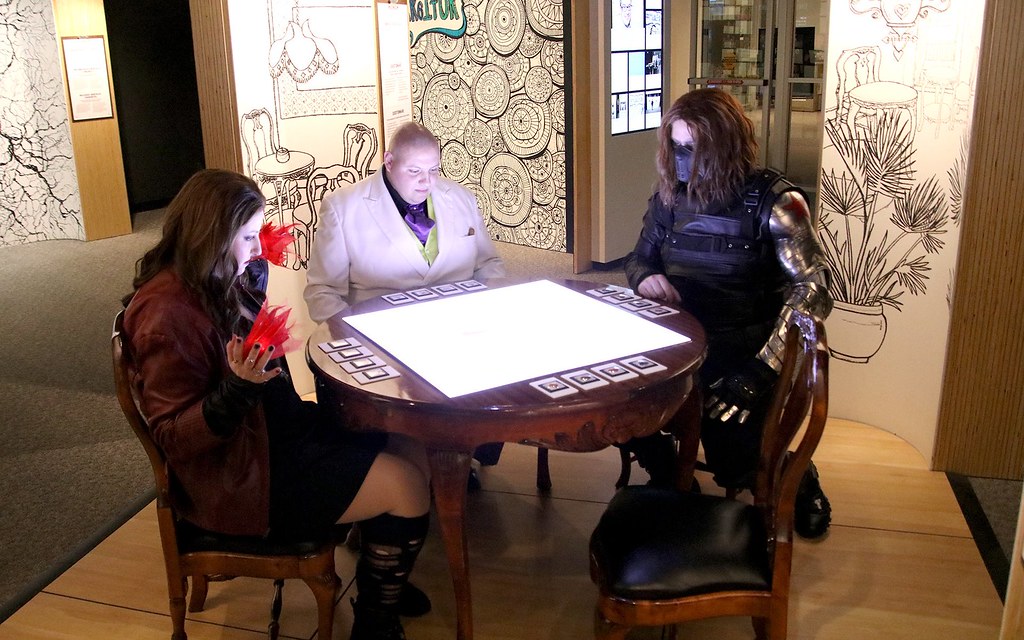 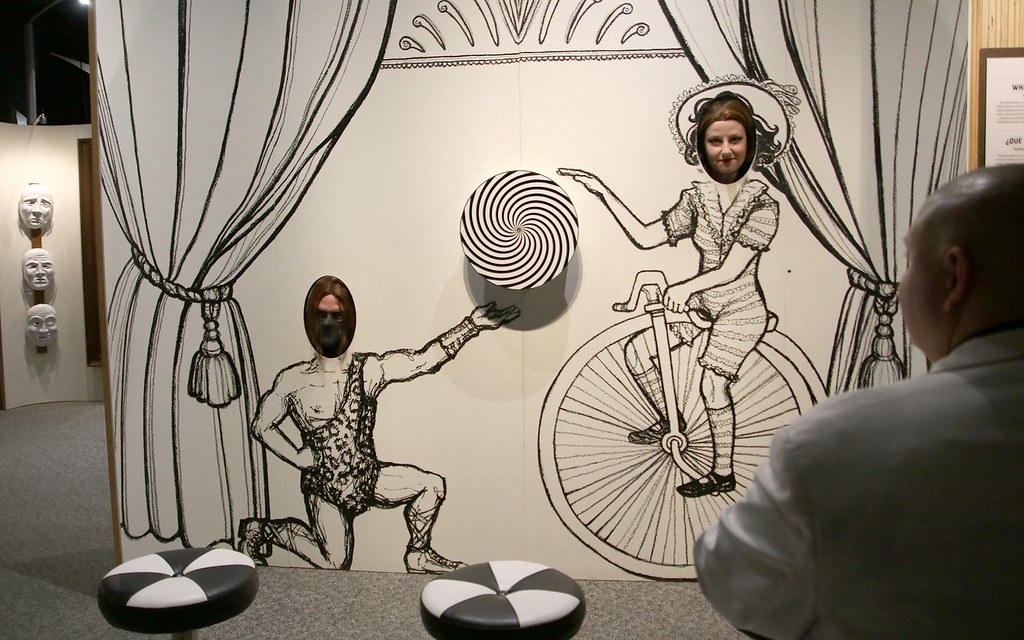 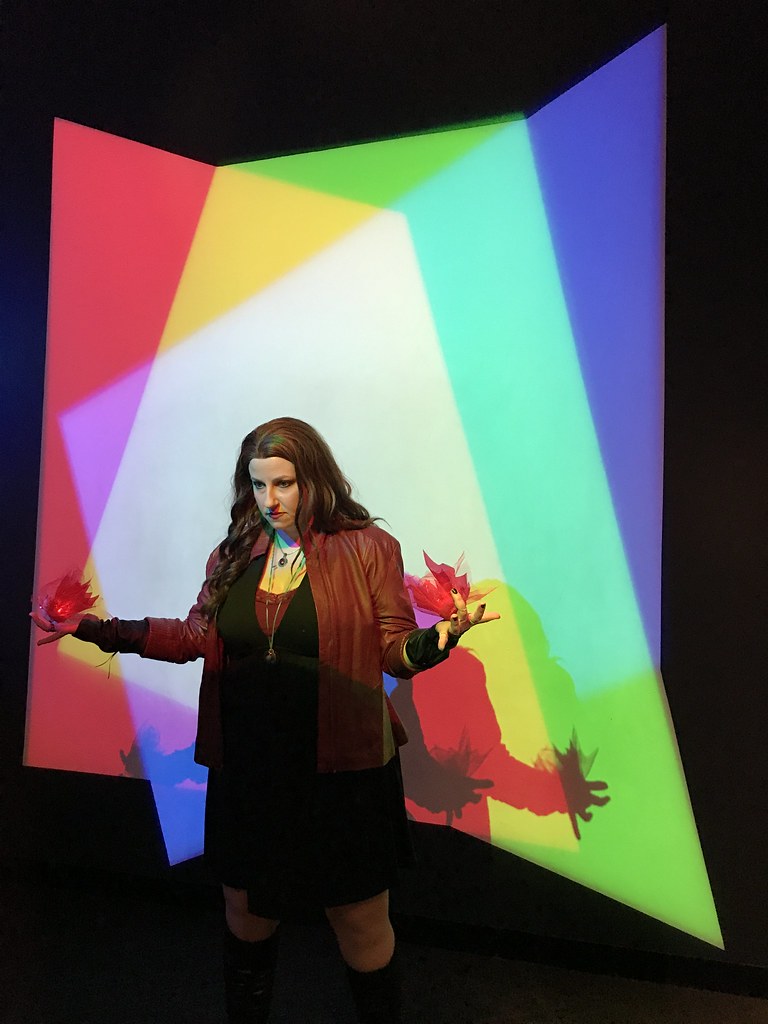 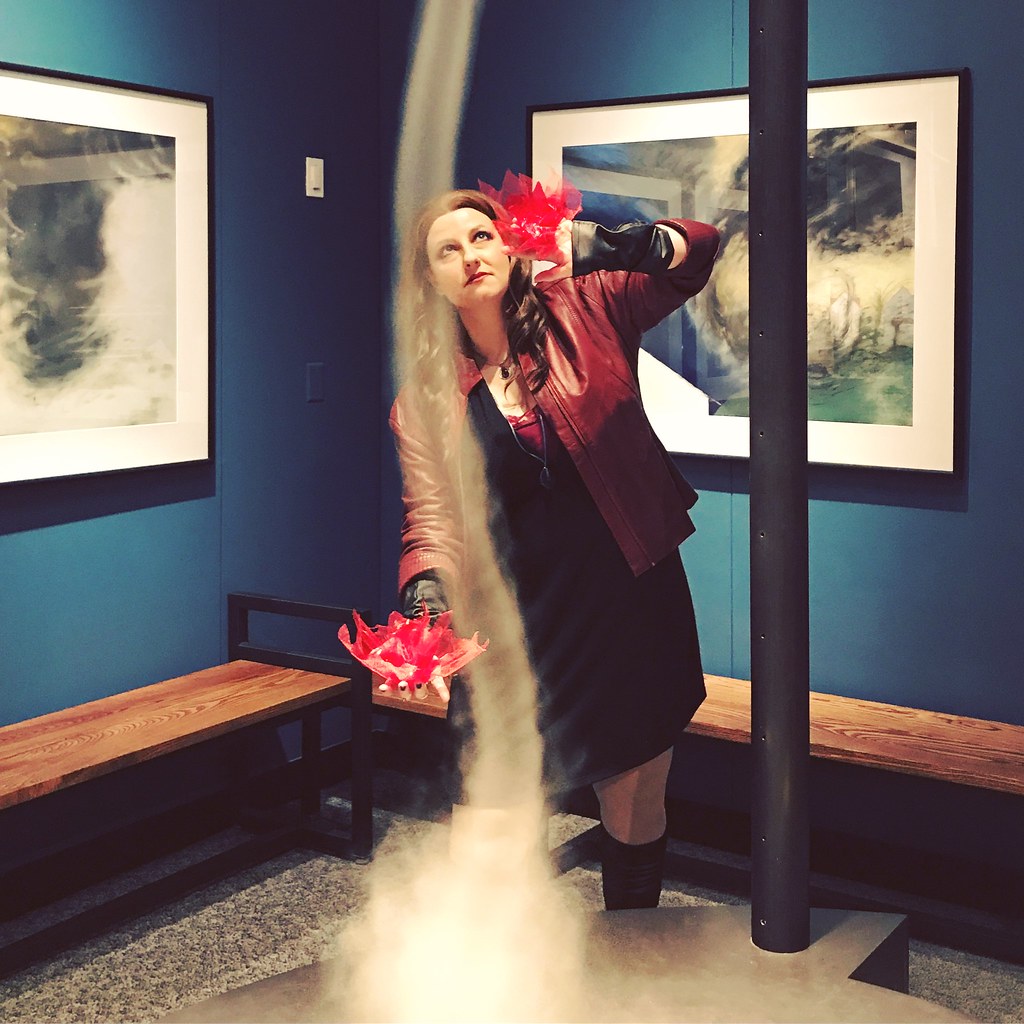 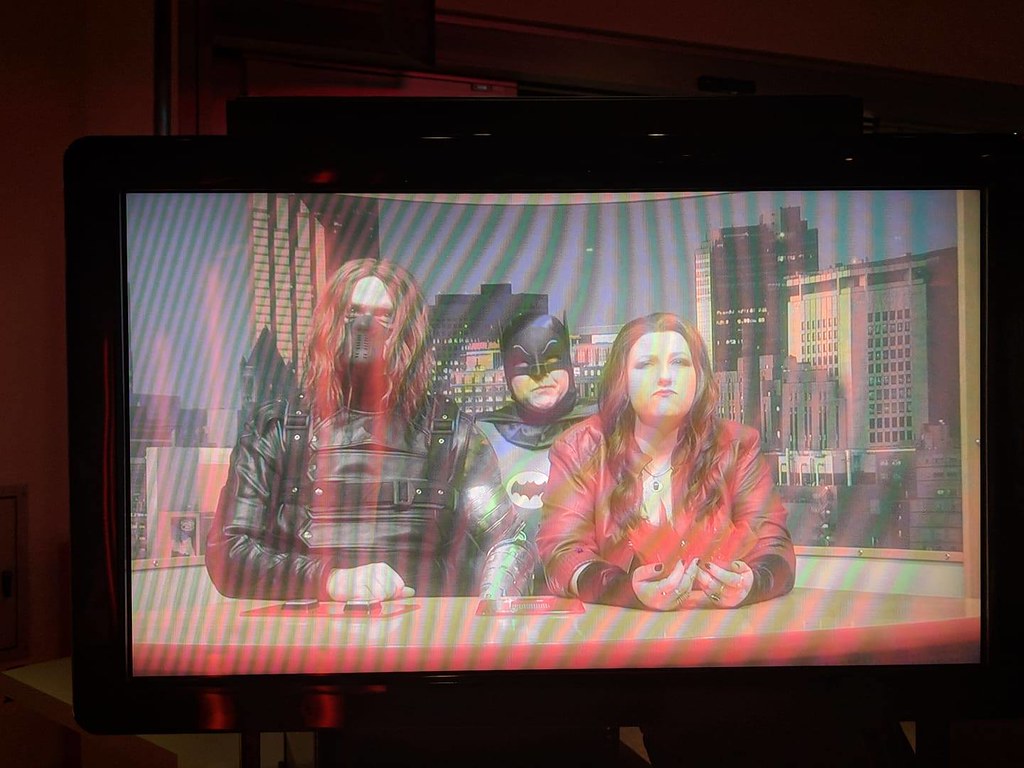 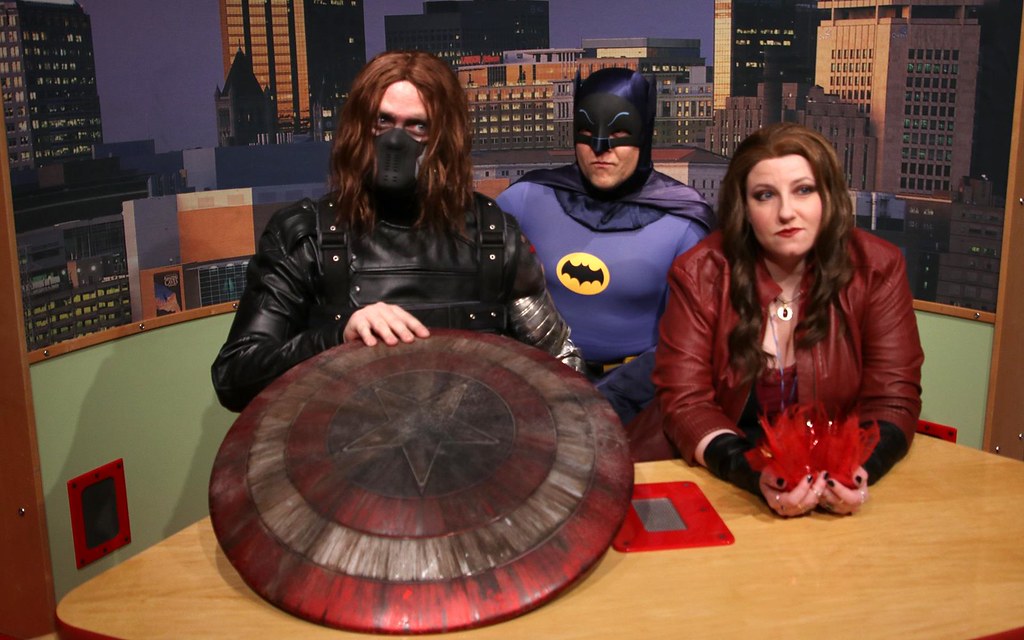 None of us know how to run a newscast. Costumers: Paul Haga, John Whitt, and Kris Heding. Photo by Alex Hall.

On October 6th, I attended the MCBA Fall ComiCon at the Minnesota State Fairgrounds. I didn’t volunteer for any groups this time around, which felt kind of odd. I did, however, debut my Peggy Carter costume and got a lot of really lovely compliments on it! I was surprised. I didn’t think anyone would be that wow’ed by it. 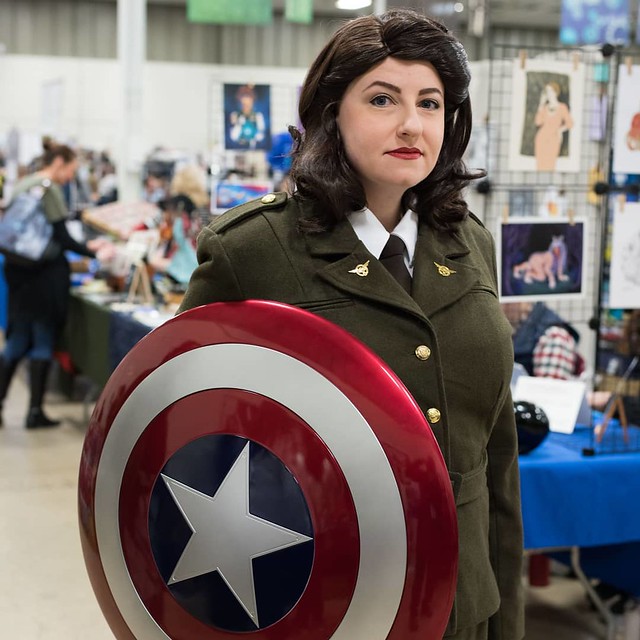 I put together this costume pretty fast, which I was not expecting. I thought it would be more difficult to find the different parts of the costume, but it was a lot easier than I anticipated.

The most difficult part was the wig styling, and mostly just because I’ve never done a 1940s hairstyle before. I used the “Aries” wig from Epic Cosplay Wigs in Dark Brown. I started off by curling the entire wig with some larger foam rollers, and then basically followed this video tutorial for styling. I did end up stitching in the combs on the sides because combs just don’t seem to hold well in wig hair (and I wasn’t about to back comb this wig and potentially damage it) and I think it works alright. We’ll see after I wear it for a while. The victory roll is held in place with a bunch of bobby pins.

The main costume is from Cosplay Sky, and I didn’t have to do anything to tailor the jacket and skirt except take the cheap lapel emblems off and replace them with metal SSR pins. The shirt it came with was kind of a cheap, satin-y shirt that definitely didn’t look like a military shirt, so I ended up ordering a women’s white military shirt. It also didn’t come with a tie, so I ordered a replica WWII tie. The shoes are a pair of chestnut-colored pumps I bought from JCPenney that looked pretty period-accurate.

The makeup was fun to do! 1940s makeup is pretty toned down, so all it really took was some subtle eyeshadow, some black eyeliner, pink blush, and screen-accurate red lipstick (Besame lipstick in Red Velvet). I also have the screen-accurate nail polish (O.P.I. “Cinnamon Sweet”) but I didn’t put that on for my test photos.

I’m holding my cheap $20 Captain America shield in this photo, but I did order a really nice Marvel Legends shield that will be coming soon that I’ll carry around instead. I figure if I have that, people will have a better idea of who I’m supposed to be since I won’t be wandering around with a Captain America costumer all the time.

All in all, I’m really happy with how this looks and I can’t wait to debut it at MCBA Fall ComiCon in October!

On September 9th, I attended HopeKids Family Day along with Minnesota Superheroes United! This is one of my favorite events to do. The kids have such a fun time (and so do we!)

This is Doug, my new boa constrictor friend. He was so awesome! Photo Credit: Snake Discovery LLC.

I submitted my Scarlet Witch costume to Minnesota Superheroes United for “formal” approval, and I was accepted! Hooray!

Minnesota Superheroes United were asked to appear at the IMAX Theater at the Minnesota Zoo for the Marvel Studios 10th Anniversary Film Festival. I think due to a lot of factors (Labor Day weekend, Renaissance Festival, Minnesota State Fair, Dragon*Con), we just didn’t have volunteers available, so it was just me and Paul standing awkwardly in the IMAX lobby dressed as Scarlet Witch and Winter Soldier. So…we didn’t get any photos of us actually at the event. Whoops.

We did arrive early, though, to watch Captain America: The Winter Soldier (because IMAX + 3D = UHHHHMAZING) and that was super fun. After the event, we both took photos of our respective costumes to submit to the MNSU to get “formal” approval – and we both got approved! So, nothing can stop Bucky and Wanda from getting into shenanigans, now.