This past weekend I attended AniMinneapolis for the first time. Another first for me was entering the masquerade! I’ve never entered a masquerade before, and I thought, “Why not?” and gave it a go. The past couple of weeks I’ve been working on V3 of the belt and glittering a new pair of boots (tutorials to come later) so I’ve been a little absent from blogging and posting on my Facebook page. Sorry, everyone!

Friday I went as General Hux, which was fun. I tried to make an angry face before I left home.

Still trying to master the “Are you not using a coaster?!” face. It’s harder than it looks.

Saturday was masquerade day, so I put on my Rebel, Rebel Princess costume and headed to the con for pre-judging! That process was more fun than I expected. It’s fun to talk to people about the creative process! The judges seemed impressed with my makeup and with the fact I hand-sewed most of my gown.

Masquerade was immediately after run-through, and my boyfriend took video of my appearance. Only issue is that my gown is so white that the light just reflected off of me and I look kind of like a blob. That’s okay, you can kind of get the idea. 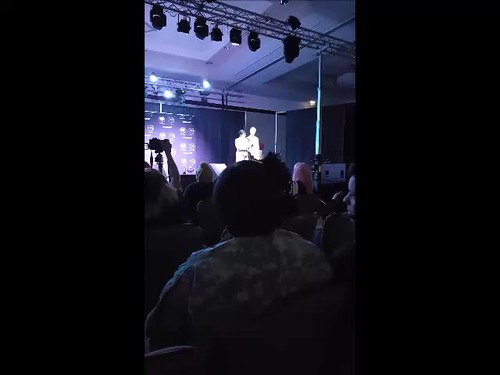 The music is part of “The Princess Appears” from “Star Wars: A New Hope” and “Rebel, Rebel” by David Bowie. My friend Jonathan put it together for me, and I love it. Especially the pew-pew at the end!

I didn’t win anything, but I’m glad I got to compete. Now that I’ve done it once, I might do it again.

Sunday I just dressed normally – well, sort of normal. I wore my twinkling stars skirt from ThinkGeek and I swear I’ve never gotten so many compliments on an item of clothing. I guess if you want a conversation starter, that skirt will do the trick!